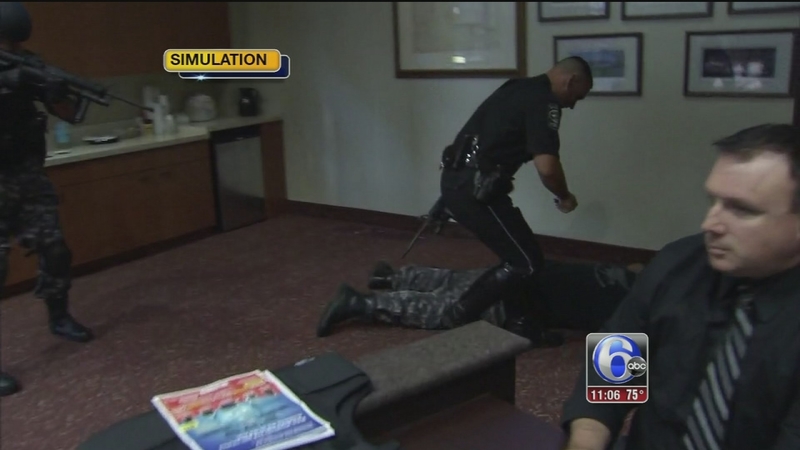 It started with gunshots and screaming from the hallway at the Radnor Township Building.

Then a man with a gun burst into the room, ranting about taxes.

After about 90 seconds, officers responded and took down the shooter, who was played by a Radnor Township detective.

Even though participants were warned the simulation would happen, they say it was still shocking.

"I felt my blood pressure go up, but it was very real and it was helpful to know what to do," said Judy Williamson of Radnor Township.

"I looked in the front to see if there was an exit and that was my first reaction," said Sara McNally of Upper Darby Township. "And I thought, 'OK there's no exit there, but how would I get to the back? He's standing almost in front of me.' "

From there, police talked about causes of active shooters and how to recognize the signs of self-radicalization and preparation.

"For a child to think to go get a school bag and hold it up to his or her head when they run away is total nonsense and it's not going to work," said Colarulo.

After the Pulse nightclub shooting in Orlando and the recent attacks at the Istanbul airport, police and citizens say it's hard not to think about situations like these.

"It's a crazy world out there and it seems to be getting even crazier," said Dick Williamson of Radnor Township.

"Sadly some people reduce this because it's almost a common occurrence, and that's not acceptable in the law enforcement community," said Radnor Township Police Lt. Andy Block.

Police also gave out cards with tips on how to survive an active shooter situation.