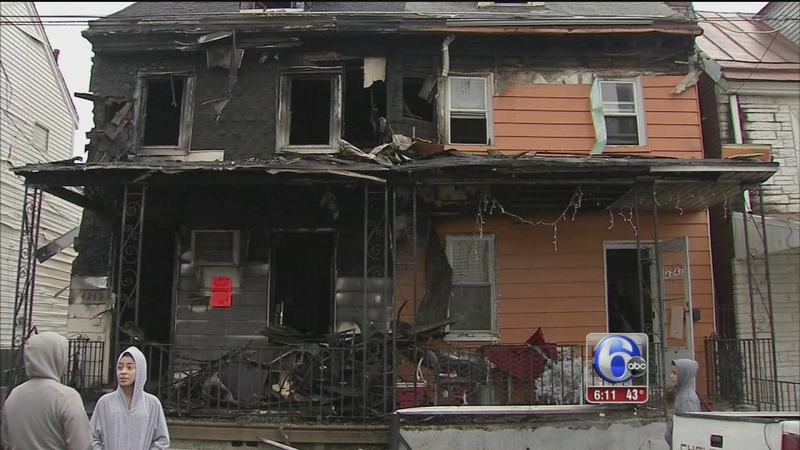 FRANKFORD (WPVI) -- A rescue dog was among two pets killed in a fire late Saturday in the Frankford section of Philadelphia.

The quick-moving fire started just after 11 p.m. in the 4200 block of Orchard Street.

A pit bull that was rescued from abuse and trained to walk again died in the fire. A 14-year-old cat also died.

The homeowner was not in the residence at the time.

Samuel Santos tells us he heard an explosion as far as a block away.

Santos ran to his mom's house, which is next door to the home on fire. His 10-year-old and 12-year-old daughters were sleeping over.

"I called them and said, 'Hurry up, it's a fire!" said Carmen Ocasio.

"Me and my sister we ran, and then my sister she looked at the fire and then she jumped, she went over there," said Unique Santos.

The fire destroyed the home where it all started, and the home the Santos girls were in is seriously damaged.

A Christmas tree could be seen on the front porch, just days from the holiday, where the family worked to board up the house that L&I has deemed an unsafe structure.

Fire officials are still investigating a cause. They had issues fighting the fire because live wires fell in the street.

The Red Cross is assisting people forced out of their home.

Fire crews are grateful no civilians or firefighters were injured.

"It's an unfortunate situation where someone's house catches on fire during the Christmas period," said Deputy Chief Troy Gore. "But companies made a good effort getting everyone out."
Related topics:
philadelphia newsfire
Copyright © 2021 WPVI-TV. All Rights Reserved.
More Videos
From CNN Newsource affiliates
TOP STORIES