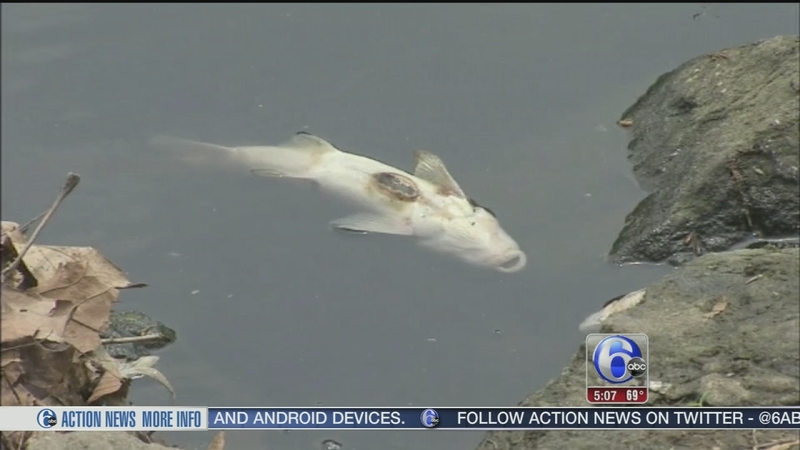 RIDLEY PARK, Pa. (WPVI) -- One community in Delaware County is dealing with hundreds of dead fish. They've been showing up along the shoreline of a neighborhood lake, and it's raising questions as well as creating a foul odor.

The waters along banks of Ridley Lake in Ridley Park are filled with dead fish of all sizes: sunfish, catfish, carp and trout.

Resident Stephen Dilks says, "I would say at least, in this area, it looks like about 30, 40 [fish]. They're all up and down the bank and all."

The park is a popular place for people to come fish and hold family gatherings. Today they couldn't help but notice the dead fish and foul, fishy odor in the air.

Monday afternoon borough workers were out skimming the surface of the water, trying to clean up the lake of all the dead fish.

Jessica Graae lives nearby. She called Action News when she couldn't get a good answer from officials as to what was going on.

Borough Councilman James Glenn met us at the lake. He said the Department of Environmental Protection came out Sunday and took samples. They determined that recent run-off from heavy rains brought an abundance of nutrients to the lake, fueling the growth of algae.

The algae and fish compete for oxygen and the algae is winning.

Glenn explains, "It can be runoff from vegetation that can stir it up. It can be from fertilizer and things like that. In addition to if the streets are hot like they were this weekend, the rain hits that, heats the water, and you're dumping warm water into the lake, which activates the algae in the lake."

A fountain installed in the lake as well as bubblers can't do enough to compete with the algae and the problems caused by the run-off caused by the heavy rain.

Officials say there is nothing in the lake which is toxic. The fish in essence are suffocating, but are otherwise just fine. So they tell us it's still safe to fish in the lake.