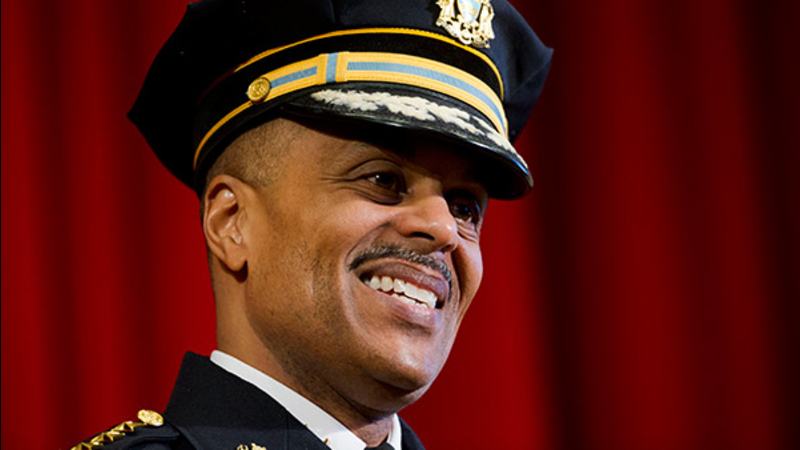 PHILADELPHIA -- Philadelphia's new police commissioner was sworn in Tuesday and said his top priority is reducing crime while improving community relations in what he called "a challenging time for law enforcement."

Police Commissioner Richard Ross was sworn in by Mayor Jim Kenney in a ceremony at Central High School, Ross' alma mater. His promotion comes a day after Kenney took over as mayor of Philadelphia. District Attorney Seth Williams held the Bible during the ceremony.

Ross, a 26-year veteran of the force, repeatedly stressed that the community must work together to make improvements.

"It is a challenging time for law enforcement. I don't think anyone can deny that," he said.

He said his department, the country's fourth-largest, has amazing, hard-working professionals, but it also has "some issues."

"We have to confront them and we have to be bold about it," he said.

Ross, 51, replaced Charles Ramsey, a well-regarded leader who presided over a dramatic decline in homicides in the city.

Ramsey's reputation also earned him the national spotlight: President Barack Obama appointed him to lead a task force in the wake of a fatal police shooting in Ferguson, Missouri.

During remarks after his swearing in, Ross said he chose to have the ceremony at Central because it represents the incredible ethnic and economic diversity of Philadelphia, what he called "a city of neighborhoods."

He said police need to be more responsive and more accountable to all neighborhoods.

Ross told a story from his childhood that he said made an impression on how communities can cooperate to boost safety.

When he was about 10 years old, he said he awoke in the middle of the night to someone screaming: "Somebody is in your house!"

A neighbor ran into their home to warn his family about a break-in, and Ross followed his pajama-clad father outside.

"I see seven or eight other fathers from the neighborhood all dressed in robes and PJs with their right hands in their robe pockets," he said.

"No one just looked out their window and said: "I wonder what's happening at the Ross house,'" he said.

He said he sees using technology like body cameras and cameras on the street, in tandem with talents of officers, as a path toward reducing crime.

"I could not be happier to lead this organization," he said, adding, "I'm not ashamed to applaud the department or talk about things we need to change. We must work together."