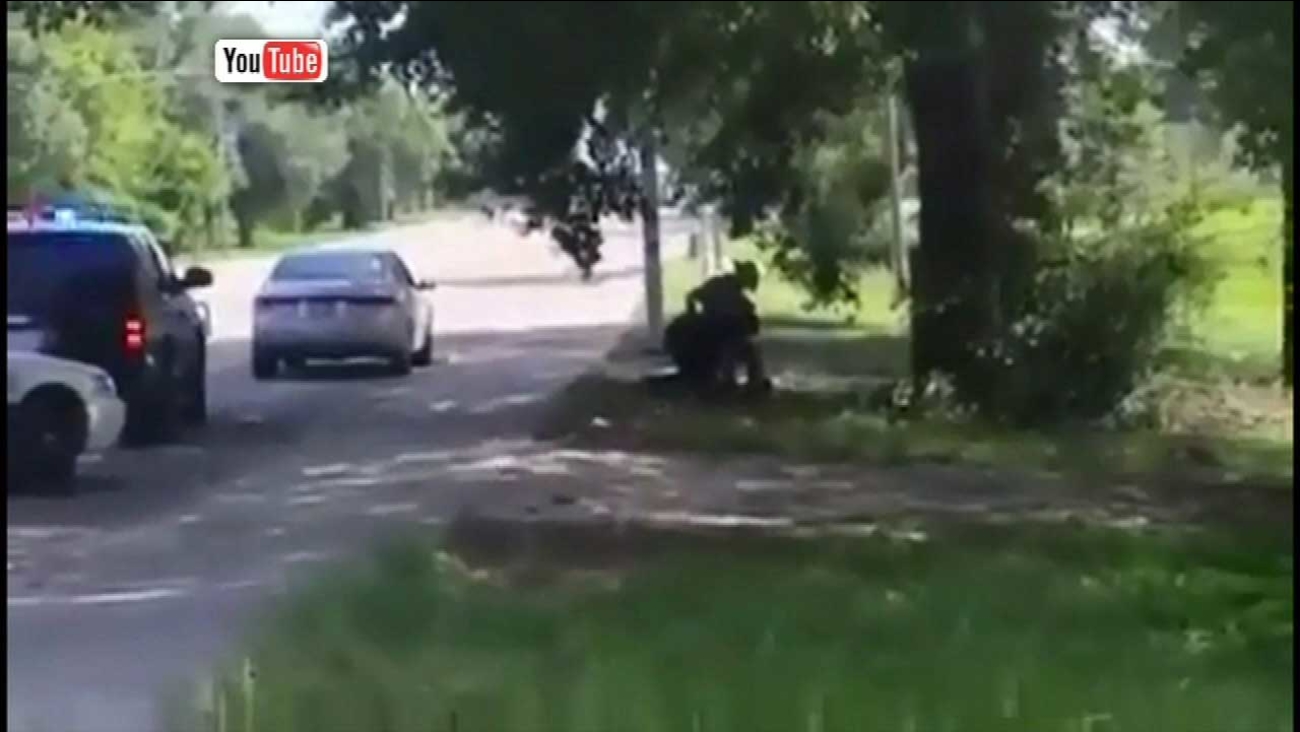 CHICAGO (WPVI) -- Newly obtained video shows the arrest of 28-year-old Sandra Bland, a Chicago-area woman whose death at a Texas jail is being angrily questioned by her friends and relatives.

Sandra Bland was found dead in a Waller County, Texas, jail cell on Monday at 9 a.m. after being arrested for allegedly assaulting a police officer during a routine traffic stop, WLS-TV has learned. Authorities say her death appears to be suicide.

In numerous emails and phone calls to WLS, her friends and relatives say they do not believe the official version of what happened and say this is a case of foul play in a county with a history racial intolerance.

Now, the station has obtained video of Bland's arrest. The video shows police on top of Bland, who is on the ground with several officers restraining her as she questions why they are being so rough. The video was shot by a bystander Friday morning, three days before she died in police custody.

Bland was pulled over Friday for improper signaling a lane change, according to Waller County Sheriff's Department officials. They say she was charged with "Assault on a Public Servant" and taken into custody by a Texas Department of Public Safety trooper.

"After he pulled her out of the car, forced her and tossed her to the ground, knee to the neck, and arrested her," says her friend Malcom Jackson.

Bland's friends say she had been with her family in suburban Chicago over the July 4th holiday, and drove to Texas for a job interview at her alma mater, Texas Prairie View A & M. Family members say she got the position and was to begin working in student outreach today.

In the video of the arrest, an officer is heard telling the bystander taking the video to leave.

In the video he shot, Bland is heard saying, "You just slammed my head into the ground. Do you not even care about that? I can't even hear!"

Then, as she is taken into custody, she repeats, "You slammed me into the ground and everything."

Waller County Sheriff Glenn Smith says Bland "had been combative on the side of the road."


Smith says that jailers saw Bland at 7 a.m. Monday when they gave her breakfast and again at 8 a.m. when they spoke with her over the jail intercom. Smith says she was found dead an hour later. In a press release from the sheriff's department, authorities say they applied CPR, but that Bland was pronounced dead shortly after she was found.

The Willowbrook High School graduate died by "self-inflicted asphyxiation," according to sheriff's deputies, who have turned the investigation over to Texas Rangers. Some family members and friends say Bland was found hanging in the jail cell, but authorities have not confirmed the exact circumstances around her death.

In a press release from the sheriff's department, authorities say they applied CPR, but Bland was pronounced dead shortly after she was found.

"I do not have any information that would make me think it was anything other than just a suicide," says Waller County District Attorney Elton Mathis.

"I do suspect foul play," says Cheryl Nanton. "I believe that we are all 100 percent in belief that she did not do harm to herself."

"We're very suspicious and we're a very tight community and we're very upset that this has happened and it seems like there's nothing really being done about it," says LaVaughn Mosley.

Longtime friend LaNitra Dean tells the I-Team that Bland "was a warm, affectionate, outspoken woman" who spoke out about police brutality often on her Facebook page and was critical of injustice against African Americans.

"Each one of us feels like we lost a part of ourselves and it's hard, it's going to be hard for a very long time," said her sister Sharon Cooper.

"The Waller County Jail is trying to rule her death a suicide and Sandy would not have taken her own life," Dean said. "Sandy was strong. Strong mentally and spiritually."

Wednesday afternoon a small group of Bland's friends converged on the Waller County jail to protest her death. The facility is 50 miles north of Houston. Family members say they intend to bring her body back to Illinois for burial when authorities release it.

Sheriff Smith said, through a statement, "any loss of life is a tragic incident."

The statement continued, "While the investigation is being conducted by outside agencies, the Waller County Sheriff's Office will continue to observe the daily operations of the jail to always look for improvements and/or preventions of these incidents."

The Texas State Rangers are now overseeing the investigation of Sandy Bland's death. They have not commented on the release of the arrest video, and there are thought to be other videos of the arrest, perhaps closer and from other angles.
Related topics:
illinoisjail deathu.s. & world
Copyright © 2020 WPVI-TV. All Rights Reserved.
More Videos
From CNN Newsource affiliates
TOP STORIES