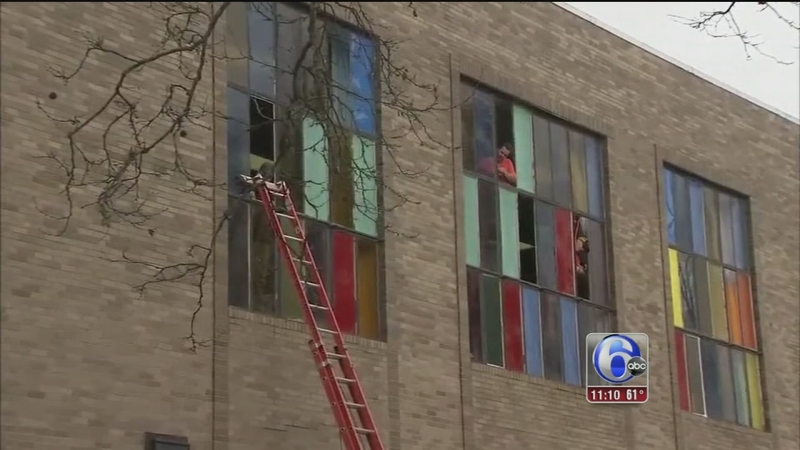 Earlier in the day, a crew replaced eight large panes of colorful but broken glass at the synagogue.

The Glaziers Union donated both labor and glass. It has an estimated value of about $3,000.

The most recent incident happened over the weekend.

"I was walking down the aisle here to talk to the cantor. Just as I got to where the cameraman is, the rock came through the window the size of a baseball," said Adler, president, Temple Menorah Keneseth Chai.

It's the second time they've been hit since December.

"The first window was one rock, one window, so it might be one person. The second one was eight windows in the matter of a few seconds, and by the time everybody got up to look out the window, they were gone, so that's why we think it was multiple people," said Philadelphia Police Lt. Dennis Rosenbaum.

Police say both incidents are connected, but are not a hate crime.

"We have no evidence of that. We don't have any direct threats, anything that would make it to that level of a hate crime," said Lt. Rosenbaum.

Tacony Town Watch has volunteered to help routinely patrol the block by the temple.

"I'm still concerned that there are still people out there that would do this to a religious institution, but I feel very gratified that there are also so many good people who are against that, rabbi.

The synagogue is improving the lighting around the building, and has just added security cameras. A $10,000 reward is being offered. Anyone with information should contact Northeast Detectives.
Related topics:
philadelphia newsvandalism
Copyright © 2021 WPVI-TV. All Rights Reserved.
TOP STORIES
Man dead after fight outside Pat's King of Steaks
Girl, 6, hit by vehicle while fleeing Philadelphia gunfire
AccuWeather: Not as hot, some downpours today
Boyfriend now person of interest after woman disappears while on trip
4 treated, including firefighter, following rowhome fire in Manayunk
1 in 500 Americans have died of COVID since 1st US infection
Primark opens at Fashion District Philadelphia
Show More
SpaceX launches 4 amateurs on private Earth-circling trip
Age-progression picture shows what missing NJ girl may look like today
4 young people shot in past week have ties to one school
98% of those who died from COVID this year in Philly were unvaccinated
DNA evidence helps Philly police make arrest in 2007 cold case murder
More TOP STORIES News