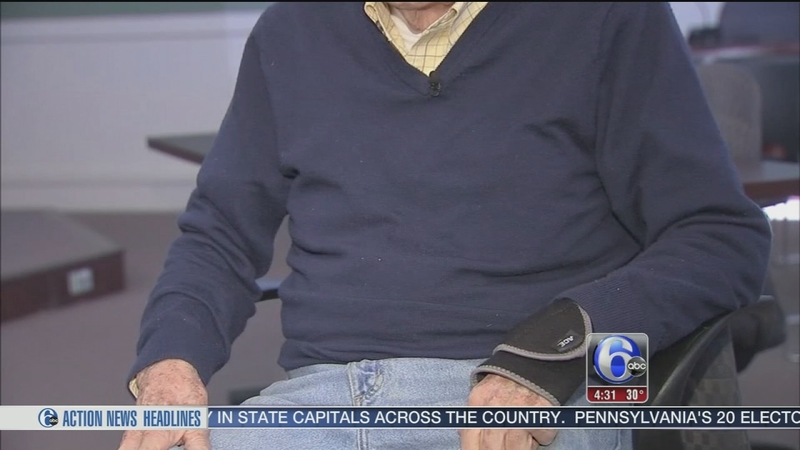 VIDEO: Elderly man scammed out of thousands of dollars

TREDYFFRIN TOWNSHIP, Pa. (WPVI) -- Police are out with a warning after a Tredyffrin Township man was scammed out of $8,000, and authorities say the scam is very common.

The scammers' target was an 89-year-old grandfather, and it all began with a heart-stopping call from an alleged police officer.

"He said I have some bad news for you. Your grandson's in big trouble," Sam said.

The caller said Sam's grandson had been the passenger in a vehicle carrying illegal drugs and needed bail money.

Sam believed at one point during the call he was even speaking directly to his grandson.

The alleged bail money was $8,000. Sam was told to load Walmart and iTunes gift cards with that amount and read off the codes on the back.

Detective Sgt. Bereda of Tredyffrin Township Police says, "As soon as they give them the code numbers, then the game's over... the money's gone."

After Sam had already given away the $8,000 on codes, he told his son what had transpired.

Detective Sgt. Bereta says to avoid this situation, all families should have their own code.

"So if you have a family code word, if someone's in trouble they're going to be able to tell you what it is," Bereta said.

Police also advise if you have caller ID and an unfamiliar number appears, let it go to voicemail.

Also, always vet and verify a story directly with the parties involved and know that no legitimate agency will ever suggest you use this kind of payment method.
Related topics:
tredyffrin townshippa. newsscam
Copyright © 2021 WPVI-TV. All Rights Reserved.
More Videos
From CNN Newsource affiliates
TOP STORIES