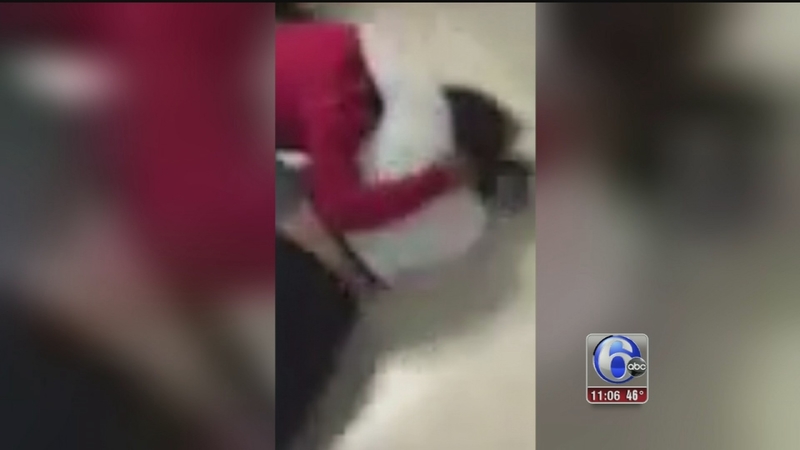 ABINGTON TWP., Pa. (WPVI) -- The Abington School District is blaming social media for the spread of altercations in connection with the hashtag #AbingtonFightWeek.

Videos of some of the fights have been posted on the Internet including one obtained by Action News that shows two girls fighting as school officials and a school resource officer attempts to break it up.

"It's all over social media. That's where I've seen most of it," said Matt Spross, junior. "I think it's just ridiculous, everyone is fighting for just no reason."

"Well, it happened here at the senior high. There was a bunch of fights happening early in the week and it just caught on," said Carter Myers, freshman.

School district Superintendent Dr. Amy Sichel did not return phone calls, but in a letter posted on the district website, she says there have been five student fights at Abington Senior High School.

In one case, she says a young man was out of control and punched a school resource officer.

She says they've also been trying to quell rumors of fights on social media and throughout the school.

Dr. Sichel's letter also states there is now an increased police presence at the high school and on the main campus.

"The police department's coming and they're like keeping everyone calm. The principals are telling us not to spread the rumors or anything," said Myers.

Parents tell Action News they find the concept of an Abington Fight Week at the high school very disturbing.

"I mean it happens everywhere, you know, it's just a bad thing that it's happening here now," said John Heard, parent. "I just hope that it can be resolved, and nobody gets hurt out of this situation, that's all."

The school district says it is investigating the fights, and warns that there will be severe consequences for some of those involved up to and including expulsion.