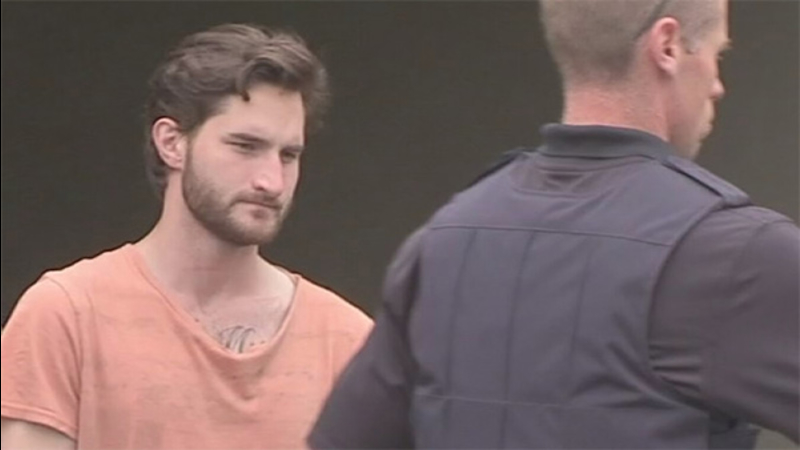 WARRINGTON TWP., Pa. (WPVI) -- The escaped Bucks County prisoner who had been on the run since Sunday night has been taken into custody.

Chief Daniel Friel of Warrington Township Police said the day started with a tip call from someone on the 2500 block of County Line Road who said he found Selby on his property.

"He was actually found sleeping in an old pickup truck on the property," Friel said. "When confronted, Mr. Selby took off running into the woods."

Police swarmed the area after that call.

Authorities say they finally made the arrest right around 12:45 p.m. after finding Selby hiding in some bushes near the corner of County Line Road and Tulip Drive.

"We brought three K-9 officers in, one from Montgomery County sheriff's, two from Bensalem. We had our perimeter set up and we had the dogs go in and flush him out," said Friel.

Authorities say all this started after Selby was picked up in Lansdowne for failure to appear on a drug charge.

Around 10:30 p.m. Sunday, while he was being transported, he told officers he was sick and was allowed out of the van.

That's when he allegedly pushed a deputy and ran off into the night, still handcuffed.

Selby was originally arrested on a drug charge. He now potentially faces a felony charge for escaping and an assault charge for pushing the deputy.

The 65-year-old, of Fountainville, Pa., is expected to be processed and arraigned on the charges of hindering apprehension, aiding consummation of crime, and obstructing administration of law.

Watch video from Chopper 6 HD as police search for an escaped inmate in Bucks County, Pa. on June 5, 2017.