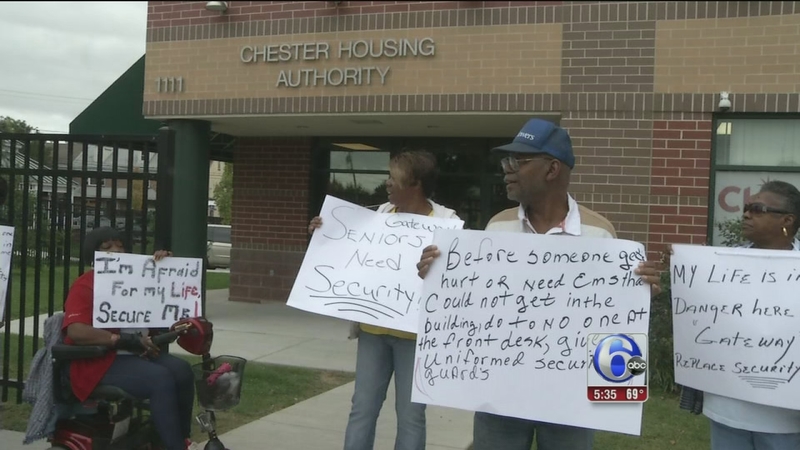 CHESTER, Pa. (WPVI) -- A group of Delaware County seniors say they don't feel safe in their own homes because there is a lack of security watching over their apartment complex.

Residents of Gateway Senior Apartments staged a protest Thursday demanding the Chester Housing Authority, which runs the building, to do something about it.

Residents say when they signed their lease, it promised 24 hour security but that is not what they're getting.

They protested outside the headquarters of the Chester Housing Authority today.

They say there have been several murders outside their gates and even a police chase inside.

Residents also say emergency medical units have not been able to get in after hours.

"We're frightened. We're not panic-stricken, but it's a very frightening situation and we're hoping it can be rectified very shortly and if not, there are many people who are going to suffer as a result of it," resident Elaine Clark said.

The Chester Housing Authority released a statement saying "Gateway has security and each tenant has a code to enter the building...It has newer security features and is one of the most highly secured senior housing buildings in Chester."

The housing authorities also says that Gateway Apartments has a monitor station that is sometimes staffed but that will no longer be the case 24 hours a day because of budget cuts.