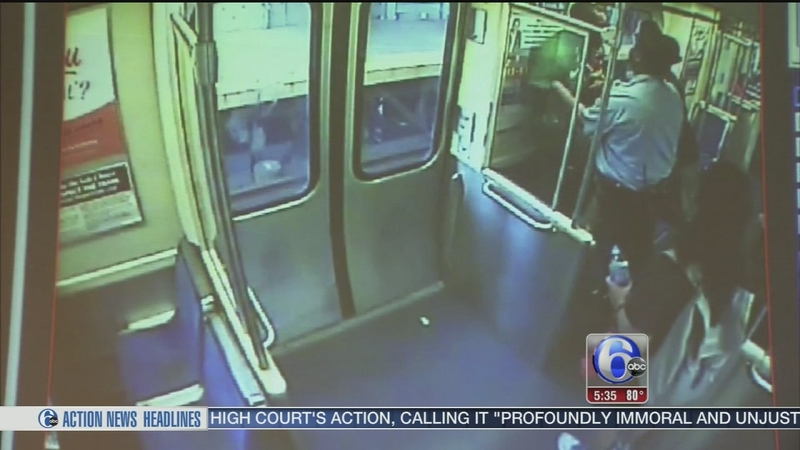 PHILADELPHIA (WPVI) -- The use of force by SEPTA police is under fire after an officer was caught on video shoving a father while he was holding his infant daughter.

SEPTA officials say they are now reviewing their policies and procedures.

The incident happened around 5:00 p.m. Thursday on the Market Frankford El.

In the video, the officer is seen grabbing the man by the neck and pushing him against the rail car. The man was holding his daughter at the time.

"I never want a child's safety being jeopardized. This is the type of incident that causes us to reflect on what we tell our police officers and how we tell them," said Chief Tom Nestel, SEPTA Police.

Chief Nestel says it started after the man evaded his fair. That's when the officer approached him.

In the video, the officer is seen engaging in conversation with the man for more than five minutes.

SEPTA officials say the officer tried to get the man to get off the El peacefully so he could be cited but the man refused.

After the push, other officers are called in and the man was handcuffed and cited.

"Officers are trained for incidents such as this. And if your training can't kick in and your common sense can't kick in to realize that a child is involved and this should be de-escalated instead of escalated," said Asa Khalif, Racial Unity USA.

SEPTA didn't name the officer but says he's a 16-year veteran with no complaints.

The officer told his sergeant that he didn't let the situation go because he feared that he'd be disciplined for non-citation.

Fare evaders have been a focus of Chief Nestel's tenure. Felony crimes have dropped 30 percent in 2014.

Fortunately neither the man, his daughter nor the officer were injured.