Series of robberies at Delaware businesses 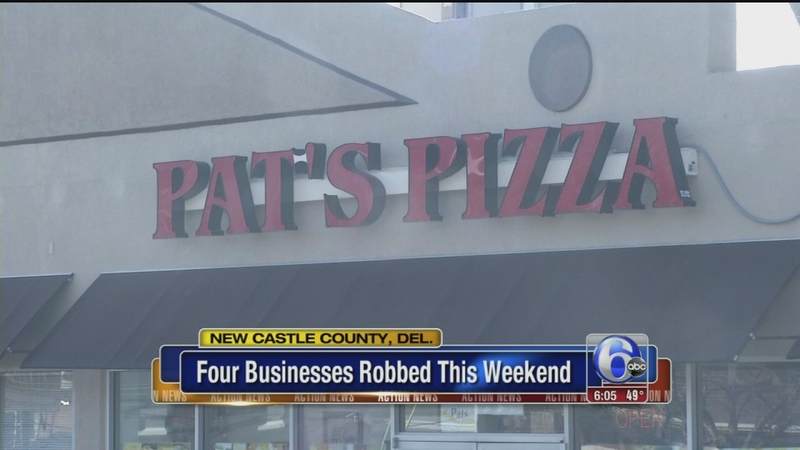 The first robbery occurred at approximately 12:58 a.m. Saturday at the Dunkin Donuts on the 4900 block of Kirkwood Highway in Wilmington.

Police say the suspect, who was armed with a tire iron, confronted a male store clerk and demanded money from the cash register.

The clerk, however, refused the suspect's demands.

Police say the suspect then climbed over the sales counter and proceeded to remove an undisclosed amount of cash from the register. He then fled. The clerk was not injured.

The second robbery occurred at approximately 10:46 a.m. Saturday at Pat's Pizza Restaurant located on the 3600 block of Lancaster Pike in Wilmington.

Police say a male suspect displayed a knife and confronted a female clerk.

The suspect then removed money from the cash register and fled.

The suspect was described as a white male, 45 to 50 years of age, 5 feet 10 inches. He was last seen wearing blue jeans and a blue hooded sweatshirt.

The third incident occurred at approximately 3:59 p.m. Saturday at the City Limits store inside of the Wilmington Flea Market at 1902 S. Maryland Avenue.

Police say the suspect, who was armed with a gun, approached a female clerk and demanded cash from the store register. The clerk complied with the suspect's demands and turned over an undisclosed amount of cash to him. The suspect then fled from the store.

The suspect was described as a black male, 30 to 40 years of age, 5 feet 9-11 inches. He was last seen wearing a black hooded jacket, red pants, black sneakers and a blue baseball cap.

The fourth robbery occurred approximately 2:12 a.m. Sunday at the Wawa on the unit block of Salem Village Square in Newark.

Police say the male suspect, who was armed with a knife, confronted a female clerk in the back of the store.

The suspect then escorted the clerk to the sales counter and demanded money from the register.

The suspect fled with an undisclosed amount of money and cigarettes.

The suspect was described as a white male, 40 to 50 years of age, 6 feet 1 inch with blue eyes. He was last seen wearing a black sweatshirt, blue jeans and tan boots.

There were no injuries in any of the robberies.

Police are not sure at this time if any of the robberies are connected.