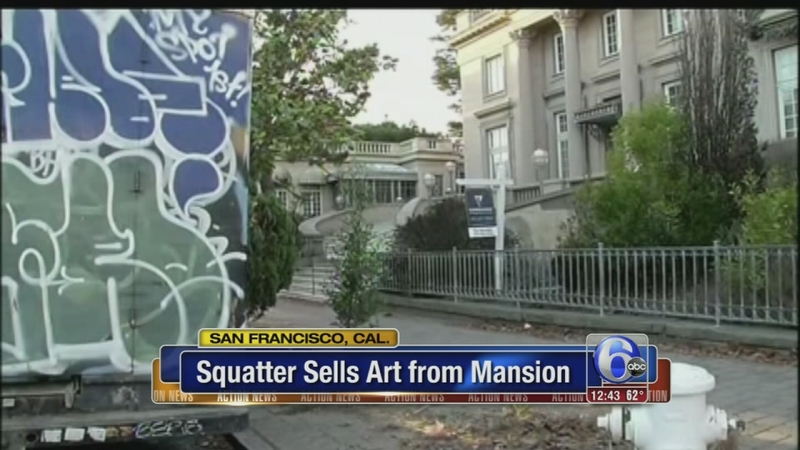 SAN FRANCISCO (WPVI) -- A brazen art heist took place in the middle of a ritzy San Francisco neighborhood. A man, who claimed to have purchased a multi-million-dollar mansion, was actually ransacking the place. Police say suspicious neighbors led to his capture.

It was an art heist, in broad daylight, from one of San Francisco's historic homes. Neighbors called police to the mansion on Washington and Maple in Presidio Heights where officers confronted 39-year-old Jeremiah Kaylor.

San Francisco police Officer Carlos Manfredi said, "He produced some type of documents saying that he was going to be the owner or proprietor to this house and he was in the process."

But police called Kaylor's bluff and arrested him before he sold another piece of art that was crated and ready to go. He had already sold off 10 other pieces -- all of it valued at more than $300,000.

"It is a little bit more sophisticated than the average squatter," Manfredi said.

On Facebook, Kaylor calls himself an artist. Police say he sold the stolen art to pawn shops and on social media during his weekend stay at the $17.9 million mansion.

"It's frightening. I mean they could walk into your house," neighbor Gwen Anderson said.

Neighbors say the 14 bedroom, 11 bath home has been vacant for years. It's unclear who owns the unkempt home and police won't say who owns the art.

"In this instance, there's been a disassociation between the owner of the property and somebody who has a responsibility for doing something with it," neighbor Allan Anderson.