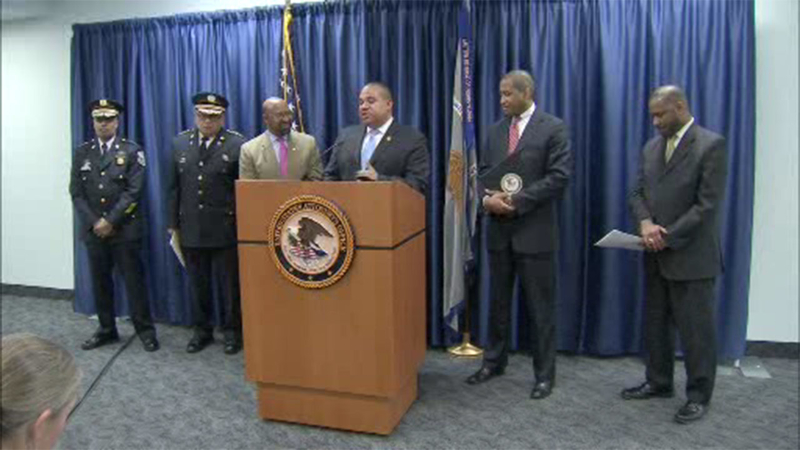 City Police Commissioner Charles Ramsey said the two agencies began talking about three months ago and are working on a memorandum of understanding. Under an agreement, the state police would be the lead investigative agency in officer-involved shootings resulting in injury or death, as well as in-custody deaths of suspects. Details of the plan are still being finalized.

The Justice Department said it doesn't track how many police departments use outside agencies to investigate police shootings.

News of the proposed agreement came amid a six-month status update detailing the Philadelphia Police Department's progress in implementing reforms after a critical federal probe on deadly force. Ronald Davis, director of the Office of Community Oriented Policing Services, said the department has made "amazing" progress in a short amount of time.

Among the recommendations was the implementation of a single, specially trained investigative unit to handle officer-involved shootings.

The report, issued in May, found the department's use of deadly force was motivated by fear and overwhelmingly affected black citizens. The Justice Department said the police department has completed or is making progress on 90 percent of the 91 recommendations listed. Ramsey said some of the remaining action items will be addressed when the agreement with state police is reached.

The shootings included 96 deaths. In the report, the Justice Department said the shootings contributed to "significant strife and distrust" between the department and the community. The probe's recommendations included intensive training in use of force and community-oriented policing.

Ramsey, who is retiring next month after Mayor Michael Nutter leaves office, said he will encourage other jurisdictions to be proactive about seeking federal help.

"As far as police chiefs go, the goal has to be to stay out of the crosshairs of (the Justice Department) to begin with," said Ramsey, who added that he sought help after reading a similar report issued about another department. "It may not be your issue today, but it could be tomorrow."
Related topics:
department of justicephilly newsphiladelphia police
Copyright © 2021 by The Associated Press. All Rights Reserved.
TOP STORIES
EF-3 tornado with winds up to 140 mph hit Bensalem/Trevose area
Video shows car dealership being hit by tornado in Trevose
NWS confirms EF2 tornado touched down on Long Beach Island
Waterspout caught on video forming over Bethany Beach
Tornado aftermath: Central NJ deals with massive tree damage
'We were refused help': Family of hit-and-run suspect speaks
Simone Biles and 'the twisties': How fear affects safety in gymnasts
Show More
Broadway announces audience vaccine, mask requirements
Severe storm causes widespread damage in Lehigh Valley
AccuWeather: Less humid and sunny today & Saturday
12-year-old girl injured in West Philly fire
CDC document warns delta variant spreads as easily as chickenpox
More TOP STORIES News