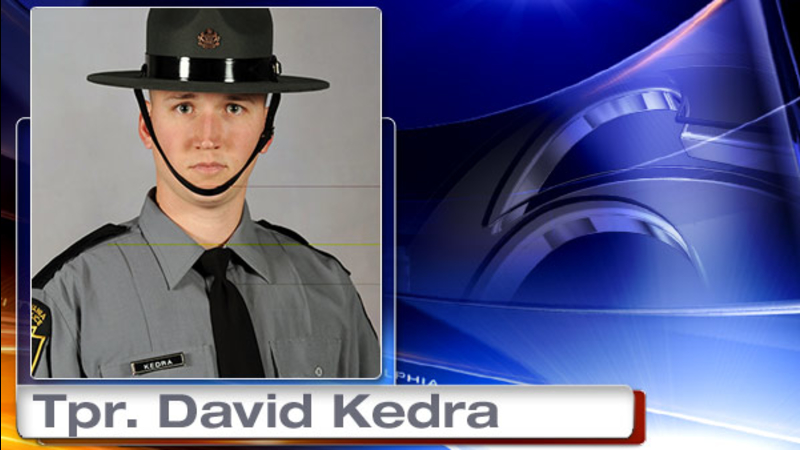 A celebration of Kedra's life is scheduled for 6:00 p.m. Sunday at John F. Givnish of Academy Road, 10975 Academy Road in Northeast Philadelphia.

A funeral service will be held at 11:00 a.m. Monday at Christ the King Church, Morrell Avenue and Chesterfield Road in Northeast Philadelphia.

Burial will be private.

In lieu of flowers, the family is asking that contributions in the trooper's memory be made to PSTA Troopers helping Troopers, 3625 Vartan Way, Harrisburg PA 17110.

"It's with an extremely heavy heart and deep sorrow that I announce the tragic death of Trooper David Kedra of Troop K, Skippack station," State Police Commissioner Frank Noonan said in a statement Tuesday night.

According to Noonan, Kedra was shot in the chest during a training exercise at the Montgomery County Public Safety Training Complex on the 1100 block of Conshohocken Road around 4:45 p.m.

Sources say he was in a classroom for a demonstration of how to break down and clean his service weapon. They say an experienced state police firearms instructor was handling a gun that somehow misfired.

The bullet hit trooper Kedra in the chest.

He was rushed to Temple University Hospital and died a short time later.

An American flag was draped over his casket.

His fellow officers saluted as it was placed into a hearse outside the hospital, with his grieving family members following behind.

Kedra was raised in Northeast Philadelphia. He was a 2006 graduate of Roman Catholic High School and 2010 graduate of Temple University, earning a degree in Criminal Justice.

He recently moved into a new house with his fiance in East Coventry Township.

In the city, Trooper Kedra's body was led through the streets by the Philadelphia Police Motorcycle Honor Guard to the medical examiner's office in University City.

Investigators have not released the identity of the instructor who shot him and they have not said if he was a member of the state police.

He enlisted in the Pennsylvania State Police in June 2012, and was assigned to Troop K, Skippack station upon graduating from the academy in January of 2013.

"He died serving the people of the Commonwealth of Pennsylvania and the men and women of the Pennsylvania State Police mourn his loss and extend our sincere condolences to his family and friends," Noonan said.

Lieutenant James Fisher said, "Whatever our troopers need at this point, we're making sure they get it, along with Trooper Kedra's family."