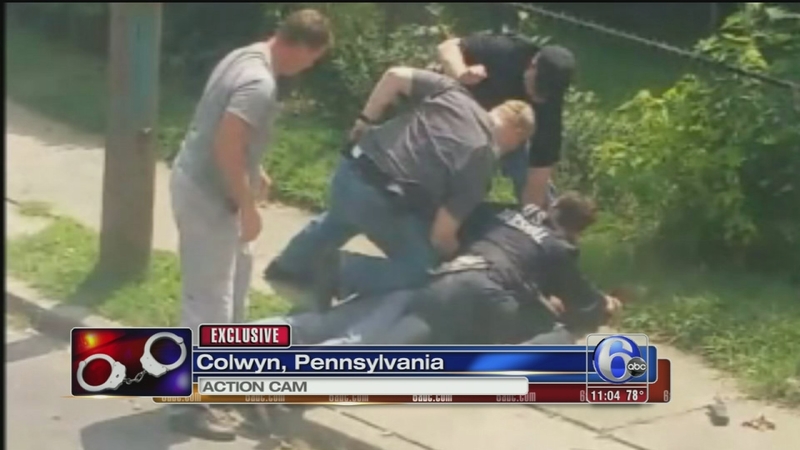 COLWYN, Pa. (WPVI) -- A dramatic arrest of a suspected rapist and police impostor in Delaware County was captured on video.

He was arrested Wednesday afternoon while trying to run from a home he was hiding out in the 100 of Main Street in Colwyn, Delaware County.

During the melee, a marshal was hit by a law enforcement vehicle and was seen limping away reaching for his leg.

"We were contacted by our counterparts in Baltimore, the Baltimore Police Department and the US Marshals in Baltimore, asking for assistance to locate and apprehend Mr. Johnson," Assistant Chief Deputy U.S. Marshal Jim Burke said.

This after it was learned that on Saturday, he once again allegedly impersonated a US Marshal in the city of Baltimore and raped another woman at gunpoint.

"He would lure his victims impersonating a US Marshal. When he gained their confidence, he produced a weapon and demanded sexual favors from them. When they didn't comply, it got physical and he would rape his victims," Burke said.

According to court records, it turns out Johnson has a long history of these crimes going back to 2005.

Meanwhile, neighbors in Colwyn were alarmed to hear the suspect was hiding there, staying with a woman who was also taken into custody.

"When I heard he was out raping people, we don't stand for that, that's uncalled for, get him out of here," neighbor Greg Davis said.

Action News is told the marshal who was struck by the car suffered a few cuts and bruises, but will be OK.

Meanwhile, Edwin Johnson is expected to be expedited back to Baltimore to face charges of rape, sexual assault and related offenses.