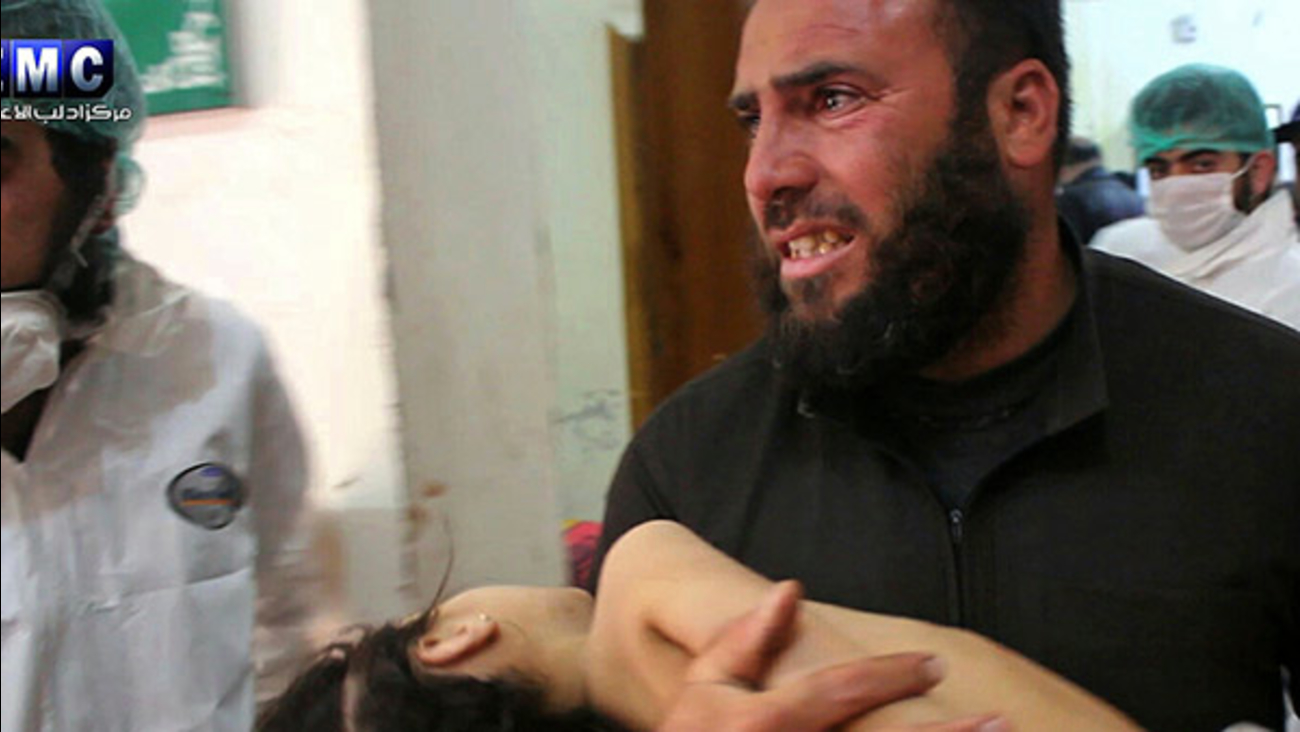 IDLIB, Syria -- A suspected chemical attack in a town in Syria's rebel-held northern Idlib province killed dozens of people on Tuesday, opposition activists said, describing the attack as among the worst in the country's six-year civil war.

Eyewitnesses said the attack was carried out by jets operated by the Russian and Syrian governments, but both Moscow and Damascus denied responsibility.

Photos and video emerging from Khan Sheikhoun, which lies south of the city of Idlib, the provincial capital, show limp bodies of children and adults. Some are seen struggling to breathe; others appear foaming at the mouth.

The activist-run Assi Press published video of paramedics carrying victims from the scene by a pickup truck. The victims were stripped down to their underwear. Many appeared unresponsive.

The Britain-based Syrian Observatory for Human Rights monitoring group put the death toll from the gas attack at 58, saying there were 11 children among the dead. Meanwhile, the Idlib Media Center said dozens of people had been killed.

The media center published footage of medical workers appearing to intubate an unresponsive man stripped down to his underwear and hooking up a little girl foaming at the mouth to a ventilator. It was not immediately clear if all those killed died from suffocation or were struck by other airstrikes occurring in the area around the same time.

It was the third claim of a chemical attack in just over a week in Syria. The previous two were reported in Hama province, in an area not far from Khan Sheikhoun, the site of Tuesday's alleged attack.

Tuesday's reports came on the eve of a major international meeting in Brussels on the future of Syria and the region, to be hosted by the EU's High Representative Federica Mogherini.

France's foreign minister condemned the "atrocious act" and both France and Britain called for an emergency U.N. Security Council meeting over the suspected attack. The Security Council will meet Wednesday morning

White House spokesman Sean Spicer told reporters that President Donald Trump is "extremely alarmed" by reports of the attack and said it was "reprehensible and cannot be ignored by the civilized world."

Spicer also laid blame on the "weakness and irresolution" of former President Barack Obama's administration, saying that Obama "did nothing" in the wake of previous chemical attacks in Syria.

Opposition activists and a doctor in Idlib said this was the worst incident since the 2013 toxic gas attack on the Damascus suburb of Ghouta that killed hundreds of civilians. That attack, which a U.N. report said used sarin gas, was the worst in Syria's civil war.

In the wake of the 2013 attack, President Bashar Assad agreed to a Russia-sponsored deal to destroy his chemical arsenal and joined the Chemical Weapons Convention. His government declared a 1,300-ton stockpile of chemical weapons and so-called precursor chemicals that can be used to make weapons amid international outrage.

Those weapons have been destroyed, but member states of the OPCW have repeatedly questioned whether Assad declared everything in 2013. The widely available chemical chlorine was not covered in the 2013 declaration and activists say they have documented dozens of cases of chlorine gas attacks since then.

The Syrian government has consistently denied using chemical weapons and chlorine gas, accusing the rebels of deploying it in the war instead.

A statement by the Syrian government said it "categorically rejects" using any chemical or poisonous agents in Khan Sheikhoun today and says it did not and will not use them in any place or any time in the past or future.

It held rebels responsible, saying they attacked their own territory in order to distract from their losses across the country. The Russian Defense Ministry also denied any involvement

Dr. AbdulHai Tennari, a pulmonologist who treated dozens of patients in the Tuesday attack, said it appeared to be more serious than a chlorine attack.

In a Skype interview, he said doctors are struggling to deal with the victims, amid a shortage of facilities and medical supplies, and the antidote used to save patients, Pralidoxem, is in short supply.

Most of the fatalities, died before they reached hospitals. "If they got the hospital we can treat them. Two children who took a while before they were lifted out of the rubble died," he said.

Mohammed Tennari, AbdulHaj's brother and a radiologist, said Tuesday's attack was more severe than previous chemical attacks his province has witnessed, most of them using chlorine cylinders.

"Honestly, we have not seen this before. The previous times the wounds were less severe. There were no deaths, not in those numbers," he said, adding the final number is unclear given the chaos that has prevailed. The doctor, who testified before the U.N. in 2015 about renewed Syrian government use of chemical attacks despite claims it has destroyed its stockpiles, said there was a chlorine smell but it was mixed with other things, "toxic gas which causes poison and death."

Tarik Jasarevic, spokesman for the World Health Organization in Geneva, said in an e-mailed statement that the agency is contacting health providers from Idlib to get more information about Tuesday's incident.

The Syrian American Medical Society, which supports hospitals in opposition-held territory, said it had sent a team of inspectors to Khan Sheikhoun and an investigation was underway.

The Syrian activists claimed the attack was caused by an airstrike carried out either by Syrian government or Russian warplanes. Makeshift hospitals soon crowded with people suffocating, they said.

Mohammed Hassoun, a media activist in nearby Sarmin - also in Idlib province where some of the critical cases were transferred - said the hospital there had been equipped to deal with such chemical attacks because the town was struck in one chemical attack, early on in the Syrian uprising.

"There are 18 critical cases here. They were unconscious, they had seizures and when oxygen was administered, they bled from the nose and mouth," he told The Associated Press by phone.

Hassoun, who is documenting the attack for the medical society, said the doctors there have said it is likely more than one gas. "Chlorine gas doesn't cause such convulsions," he said, adding that doctors suspect sarin was used.

Hussein Kayal, a photographer for the Idlib Media Center, said he was awoken by the sound of a bomb blast around 6:30 a.m. When he arrived at the scene there was no smell, he said.

He found entire families inside their homes, lying on the floor, eyes wide open and unable to move. Their pupils were constricted. He put on a mask, he said. Kayal said he and other witnesses took victims to an emergency room, and removed their clothes and washed them in water.

He said he felt a burning sensation in his fingers and was treated for that.

A Turkey-based Syrian man whose niece, her husband and one-year-old daughter were among those killed, said the warplanes struck early, as residents were still in their beds. He spoke on condition of anonymity because he feared for the safety of family members back in Syria.

The province of Idlib is almost entirely controlled by the Syrian opposition. It is home to some 900,000 displaced Syrians, according to the United Nations. Rebels and opposition officials have expressed concerns that the government is planning to mount a concentrated attack on the crowded province.

The New York-based Human Rights Watch has accused the Syrian government of conducting at least eight chemical attacks using chlorine gas on opposition-controlled residential areas during the final months in the battle for Aleppo last year that killed at least nine civilians and injured 200.

A joint investigation by the United Nations and the international chemical weapons watchdog determined the Syrian government was behind at least three attacks in 2014 and 2015 involving chlorine gas and that the Islamic State group was responsible for at least one, involving mustard gas.