Suspects caught on camera in 2 ATM robberies in Toms River 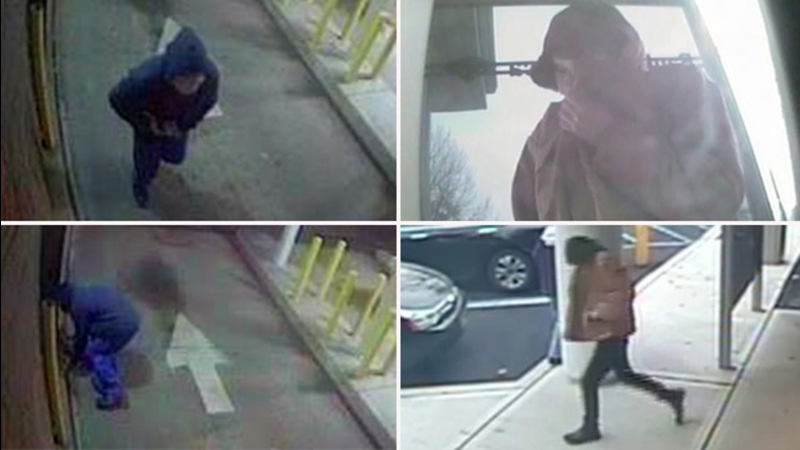 TOMS RIVER, N.J. (WPVI) -- Police are warning residents in one Jersey shore town to keep your guard up when using the ATM. This after two women were robbed at two separate banks in Toms River this week.

The first happened at 4:00 Monday afternoon at a Bank of America on Route 37.

A 68-year-old Berkeley woman had just entered her pin number into the machine.

Toms River Police Spokesman Ralph Stocco explains, "He came up behind her and said, 'this is a robbery, get out of the way,' and gave her a push to the side and then jumped right into the machine."

The suspect, who was captured on surveillance video, was in his late 20s, about 5'10", wearing a wool hat and brown jacket.

The second robbery happened at 7:40 Wednesday evening at the Wells Fargo on the 1800 block of Hooper Avenue.

A 19-year-old Toms River woman was approaching the ATM to make a cash deposit when she was surprised from behind by a man wearing a white ski mask, hoodie and jeans.

"And he put his hand near his waistband and she thought that he may have had a gun, although he didn't show one. And at that point he said, 'drop it,'" Stocco said.

Surveillance cameras captured video of the suspect scooping up the money.

Both victims complied, which is what police want you to do.

In light of the two incidents, police are urging residents to be extra vigilant when they use an ATM, especially after normal business hours. They recommend doing a loop around the parking lot to look for anyone suspicious, and if you don't feel safe, leave.

The bottom line is you need to be aware of your surrounds whenever and where you use an ATM.

If you recognize the suspects you are urged to contact police.