Train explosion in West Virginia: Could it happen here?

Bakken crude- named for the region where it is found in North Dakota - is a highly flammable and volatile form of oil.

Fires were still burning on Tuesday, more than a day after a train carrying more than three million gallons oil derailed and set off the explosion in Boomer, W.V.

Hundreds of families were evacuated and two water treatment plants were temporarily shut down after 19 of the tanker cars left the tracks and caught fire, burning a nearby house down to its foundation.

"There's nothing there," said Democratic U.S. Sen. Joe Manchin, who toured the scene alongside a Kanawha River tributary. "All you can see is a couple of blocks sticking out of the ground. There's some pickup trucks out front completely burned to the ground."

One person was treated for smoke inhalation, but no other injuries were reported, according to the train company, CSX. The two-person crew, an engineer and conductor, walked away unharmed.

"It was a little scary. It was like an atomic bomb went off," said David McClung, who felt the heat at his home about a half-mile uphill. He said one of the explosions sent a fireball at least 300 feet into the air.

Fire crews had little choice Tuesday but to let the tanks burn themselves out. Each carries up to 30,000 gallons of crude.

Action News first reported on the paths these trains take through our area: down around the Schuylkill River, though neighborhoods, across the city, and over into neighboring New Jersey.

Rail Safety and Security expert Fred Millar says a few metropolitan cities have required the railroads to re-route trains around residential areas. But that hasn't happened in Philadelphia.

"American Citizens are being kept at enormous risk," Millar said.

Fortunately, there was no oil spilled and the trains did not explode in those two instances.

"Fortunately we've not had any significant incidents and would like to keep it that way," Nutter earlier said to Action News. 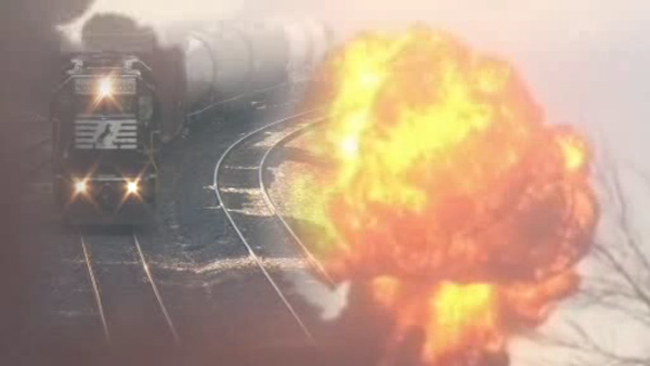