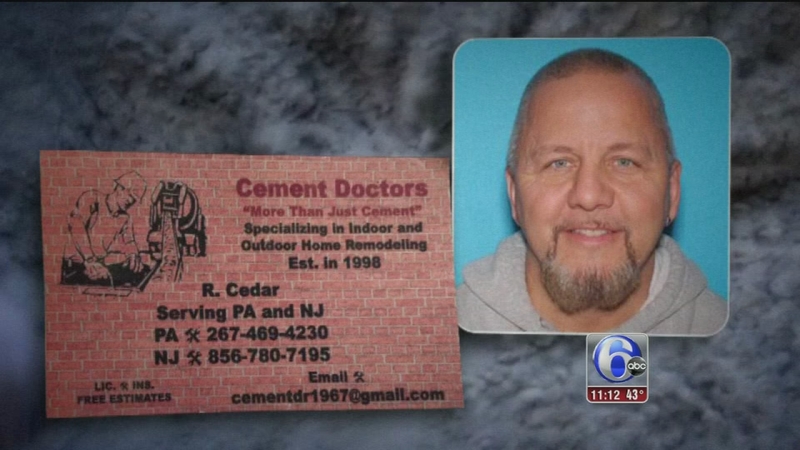 WESTAMPTON, N.J. (WPVI) -- A local consumer says she paid hundreds of dollars for work that never even got started.

Our Troubleshooter Nydia Han has a warning after working to track down answers.

This one's a doozy, taking a few unexpected turns. And the consumer we interviewed isn't the only one complaining.

"He" is Ray Cedar, and owns a Philadelphia-based business called Cement Doctors.

Jess Demarco says the business isn't doing any healing. Instead, its causing her nothing but pain.

She says she and her husband gave Cedar a 50 percent deposit of $700 for work to begin in a few days.

"He never showed up. This repeated itself five or more times," said DeMarco.

In a text to the DeMarcos, Cedar claimed, "A concrete truck was at your home," and the delay was "due to weather".

But DeMarco showed us records she pulled from the National Weather Service.

Demarco's case and another one are pending grand jury presentations.

"I saw no such evidence that he is licensed or insured through New Jersey, which is a requirement," said Lt. Rogers.

Same in Pennsylvania. In fact, not only is Cedar unlicensed as a contractor with the Attorney General's Office, his business name isn't registered with the Department of State.

And speaking of business names, there is a different Cement Doctors in Pennsylvania.

This one's in the Pittsburgh area that does have the proper registration and license, as well as an A+ with the Better Business Bureau.

Ray Cedar's business with the same name has an F.

"Angry. Sure you get a little angry because it affects us. Even though the guy's way down there, they think we're a franchise and we're hooked together, and we're not," said Joe Malizia, owner of Pittsburgh-based Cement Doctors.

And as for Ray Cedar, DeMarco had this to say:

When hiring a contractor - aside from checking for a license, registration and insurance - pay no more than one-third up front, and get a written agreement that includes a start and completion date among other things.