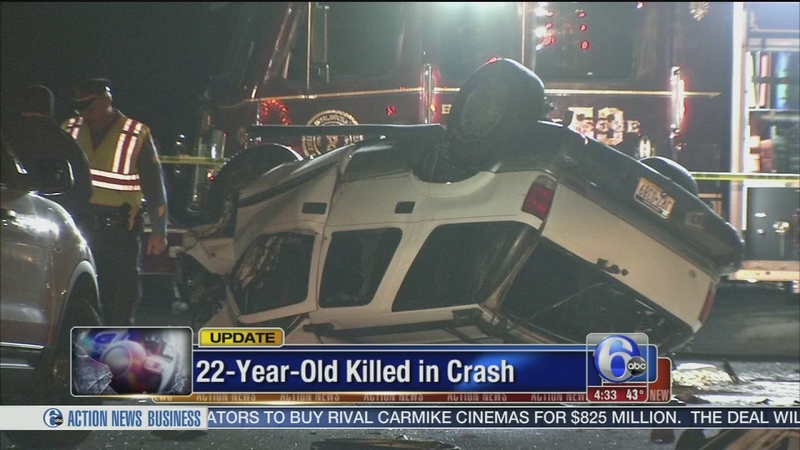 CROYDON, Pa. (WPVI) -- The victim who was killed in a crash in Croydon, Bucks County Tuesday night has been identified as a 22-year-old female from the area.

Her name, however, is not being released.

It happened around 7:48 p.m. Tuesday on River Road between 1st and Cedar avenues.
The crash involved a white GMC Jimmy and a Nissan Sentra. Police say both vehicles were going in opposite directions when the collision occurred.

It's a 25mph speed limit in a residential neighborhood, so police believe at least one of the vehicles was going above the speed limit.

The impact sent the Nissan into the driveway of a home and onto two parked cars.

The SUV traveled 100 feet further before landing upside down.
"I heard a big bang. It sounded like a bomb. We came running out. We saw car parts here along on Cedar Avenue. We ran around the corner, we saw the one car in the driveway, and the other flipped upside down," witness Kayla Lux said.

Lux said they saw a man get out of the SUV and was able to walk.

She said they were not able to get a response from the woman in the Nissan.

Fire Chief Tom Tryon said the woman was pronounced dead at the scene. The man, who is in his 50s, was taken to Aria Health Torresdale where he was treated for moderate injuries.
Residents say speeding in the area is not uncommon.

"People fly up and down this street all night long. Something needs to get done about it. Police need to enforce it more, I think," resident Steven Gallagher said.

Police are continuing to investigate to determine who was at fault and if any charges will be filed.
Related topics:
croydonpa. newsaccidentcollisioncrash
Copyright © 2021 WPVI-TV. All Rights Reserved.
More Videos
From CNN Newsource affiliates
TOP STORIES