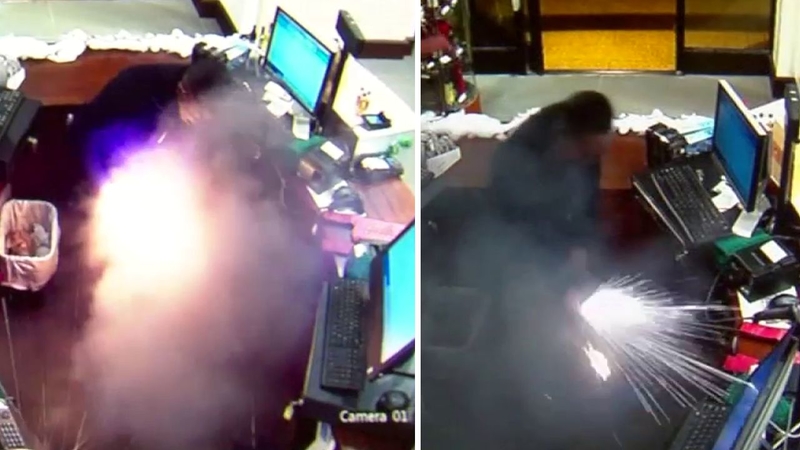 MANHATTAN, N.Y. (WPVI) -- A worker at a wine store in Grand Central Terminal suffered burns to his hand and leg after an e-cigarette caught fire in his pocket Wednesday morning in Manhattan, New York.

The incident, which was captured on surveillance camera, happened around 9:50 a.m. inside Central Cellars.

Otis Gooding, 31, of Jamaica, Queens, was working in the store when the cigarette started sparking in his pocket. A colleague said it was sizzling and then caught fire.

"Out of nowhere, a huge explosion came from one of my co-worker's pockets. It just shot at us," said Byron Gonzalez, who witnessed the ordeal.

Surveillance video shows an e-cigarette explode inside a man's pocket in a store in Grand Central Terminal. Video courtesy of Central Cellars.

"His pocket just engulfed in flames. There were sparks. I thought it was fireworks like Fourth of July," said John Lee. "I thought he had a pocket full of fireworks, and then I realized he had an e-cigarette."

In the video, Gooding is seen patting his leg, and reportedly burned his hand.

He was taken by private ambulance to a local hospital, where he's in stable condition. His attorney, Sanford Rubenstein, said he was admitted to the burn unit for treatment and will require surgery.

This photo taken by Lee shows the aftermath of the explosion:

Lee said the e-cigarette had a high-voltage battery, but there was no indication why it caught fire.