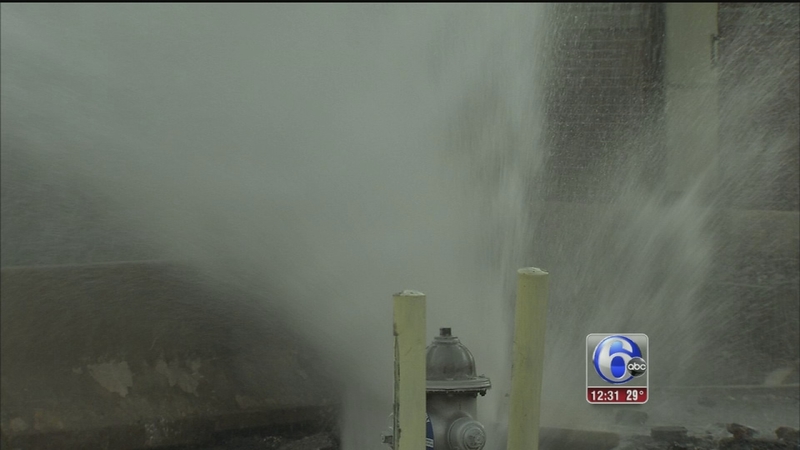 CONSHOHOCKEN, Pa. (WPVI) -- The water has been turned off after a large water supply line ruptured in sub-freezing temperatures, creating an early morning geyser in Montgomery County.

The break happened before 6:30 a.m. Wednesday at Washington and Cherry streets in Conshohocken.

Dramatic images from Chopper 6 HD showed a large amount of water gushing high into the air from a hole in street.

Thousands of gallons of water kept shooting into the air.

The bushes and power lines near the business were quickly covered in icicles, and the American flag was frozen and struggling to wave.

An Aqua utility crew arrived on the scene.

A few minutes after 7 a.m. a worker used a small crane to place a large piece of concrete in the hole, in what appeared to be an effort to cap the flow of surging water.

Workers attempted to deflect the surge of water from a freezing geyser in Conshohocken before the water supply was finally shut off.

About 15 minutes later, the worker placed another piece of concrete beside the hole.

The flow of water did not appear to be affected by either action.

Finally, at 7:30 a.m. the water supply to ruptured line was shut off.

Lepore said he was amazed a broken water line could do so much damage.

"It's unbelievable," he told Action News. "I can't believe the main broke, that it broke in a way we had water gushing vertically and over onto our roof flooded our office."

There was so much water everywhere, and because the roof drains froze, that water had nowhere to go. It seeped inside, flooding the right side of the building.

By mid-morning Peco utility crews were chipping away the ice from the lines above.

Fortunately, even though the break happened alongside train tracks used by SEPTA, there were no major delays reported by the transit agency.

Fire crews responded to make sure the building wasn't in danger of collapsing.

The fire marshal believes cold weather is to blame for rupturing the water line.

Lepore said he did not know how long the cleanup would take or the total estimate of the damage.