WPVI
PHILADELPHIA (WPVI) -- A recent graduate of West Catholic Preparatory High School in Philadelphia has been identified as one of the people killed in the Orlando nightclub massacre.

The death of 18-year-old Akyra Murray was announced in a post on the school's website Monday afternoon.

She graduated third in her class just last week, and had just signed a letter of intent to play basketball for Mercyhurst University back on May 9th.

"May God bless Akyra's soul and provide comfort to all family and friends during this very troubling time," the school's statement reads. 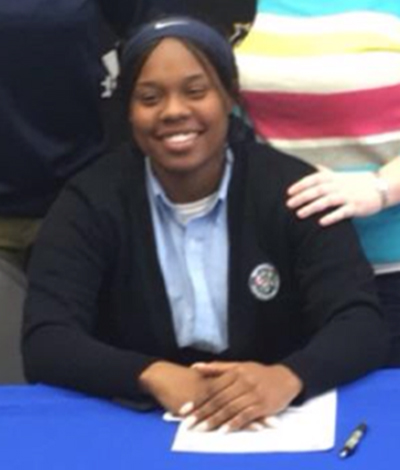 To celebrate her graduation, Akyra Murray, her parents and her 4-year-old sister traveled to Orlando for a family vacation. Her brother, Alex, attends college in West Palm Beach.

In an interview with the Associated Press, Murray's mother, Natalie, said Akyra told her parents she wanted to party in downtown Orlando.

At about 2 a.m., Akyra Murray sent a text message to her mother, telling her to pick up her and her cousins. She said there had been a shooting.

Her parents sped back to the club from nearby Kissimmee, frantically trying to reach the teenager, who had been shot in the arm.

"I just tried to tell her to remain calm and apply pressure to the wound," Natalie Murray said. "All I could hear was my baby screaming."

Murray said her daughter was hiding in a bathroom stall, her arm bleeding for hours with no medical treatment.

Akyra Murray told her mother to call police and send help before the two hung up.

They never spoke again. "It was devastating," Natalie Murray said.

"We just wanted to know for ourselves," she said. "We wanted somebody to tell us something."

Late Monday morning, after calling a hotline set up by city officials, they received the news of her death.

The school says a vigil is planned for Wednesday evening, with more details to be announced. Grief counselors will be at the school the rest of the week.

In a post about her signing, West Catholic said Murray scored more than 1,000 points and gained multiple All-Catholic Honors.

But her coach, Jim Gallagher, says basketball did not define Murray.

"Very respectful to everybody. She just embraced everybody here and treated everybody as an equal," Gallagher said.

Those sentiments are echoed by Napoleon Kingcade, who runs the summer league that Akyra played in.

"She had everything going for her. Everything. Perfect student, mannerisms top notch. You can't ask for anything better from a high school kid like Akyra Murray," said Kingcade.

The gunman, 29-year-old Omar Mateen, was killed in the early Sunday incident during a gun battle with SWAT officers. A total of 49 people were killed.

The victims of the Orlando shooting
Forty-nine people were killed on Sunday, June 12, 2016 in Orlando when a gunman opened fire inside Pulse Nightclub.

Murray was at the club with her friend, Patience Carter, who attended University City High School and is a student at New York University.

They were with a third person, and Action News is working to learn more details about that individual.