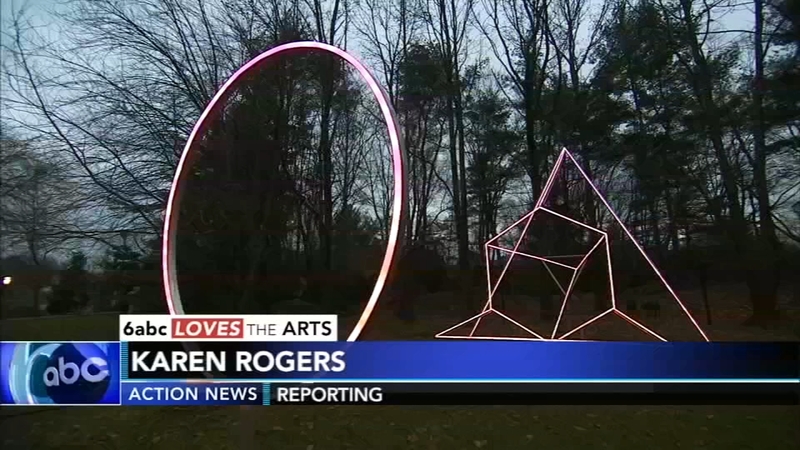 HAMILTON, N.J. (WPVI) -- For 30 years, Grounds for Sculpture has been wowing visitors in Hamilton, New Jersey, with roughly 300 outdoor sculptures.

Now, you can experience the park in a whole new way.

"Through a dozen site-specific installations using light, sound and video projection," says Faith McClellan, Director of Collections and Exhibitions at Grounds for Sculpture.

It's a multi-sensory immersive exhibition.

And it offers the chance to explore the winter grounds after hours.

"This is really the first time that we've done anything to activate the grounds at night. We really wanted to flip the script," says McClellan.

The visuals are all choreographed to original sounds and music.

"Each of the installations creates an opportunity to engage the viewers with our art and horticulture collections," McClellan says.

Rivera is the mastermind behind Klip Collective.

"Klip started in 2003," says Rivera, "You might have seen our work on City Hall during the holidays."

He uses what he calls Projection Mapping to create the magic.

"Projecting pixels onto an object or space," Rivera says.

The dreamloop project was planned pre-pandemic.

"Then obviously, the pandemic happened. And everyone cried, I cried," Rivera says.

He reveals the sculptures on the grounds inspired his creations.

"Frog Head Rainbow, we projection-mapped the statues in the back and they throw up rainbows," says Rivera.

The frog sounds were recorded on site.

"Some are kind of shows, the Glitch, it's very intense," Rivera adds.
--