Storm off the coast causes flooding at Jersey Shore 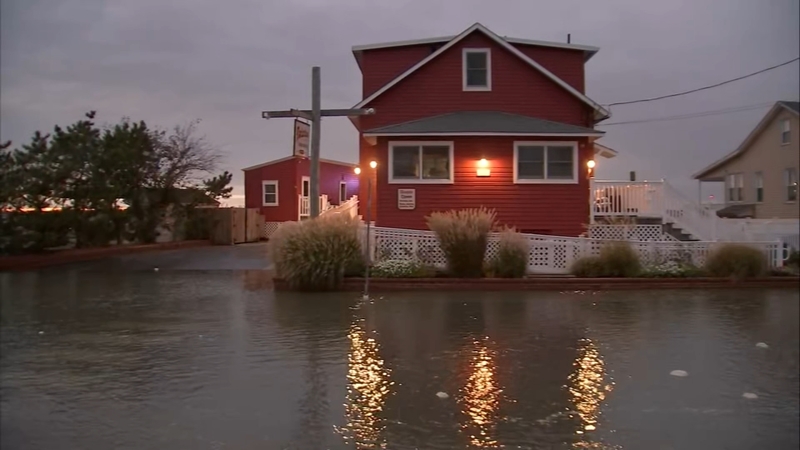 Storm off the coast causes flooding at Jersey Shore

ATLANTIC CITY, New Jersey (WPVI) -- Residents at the Jersey Shore had to deal with some continued flooding on Friday, and several events scheduled for the weekend were either changed or canceled due to the weather.

"A lot of streets are still flooded. The street in front of my house is flooded. It's starting to recede but we have two more high tides to go through," said David Burns of Harvey Cedars.

A storm off the coast of South Jersey is causing some flooding as reported by Bob Brooks during Action News at 11 on October 10, 2019.


Folks on Long Beach Island were bracing for another round of flooding on Friday evening, planning as best they can, deciding if leaving their street is worth the risk.

"She might be able to get there but coming home that wouldn't be happening. It's just going to get worse," said Russell Farina, whose wife works on the island.

The LBI International Kite Festival had to cancel its first day because of the tidal flooding.

"Kite fliers are pretty flexible and understand that it's the weather and it's the elements that are making decisions about whether or not they're going to be flying," said Lisa Willoughby, one of the kite festival's many organizers.

In Atlantic City, water lapped over West End Avenue from the bay; drivers navigated through the shallow bits, but parts were too deep and barricaded off.

Over on Winchester, sandbags were piled at one door, while nearby water crept from the bay up Annapolis.

The area does flood, but neighbors say it's worse than usual and that repairs to the bulkhead would help.

"You watch the tides, you know ahead of time what you have to do, and you get away," Tom McGonigle of Atlantic City said.

In Margate, fences were dragged out and set up at Monmouth and Washington, hit with a second round of flooding Friday morning, with a third round expected in the evening.

Neighbors say this is an improvement.

"It was a foot higher than it is right now. And in fact, a BMW was lost right at the intersection," Charles Adams of Margate said.

The New Jersey Casino Reinvestment Development Authority is offering free parking to Atlantic City residents in the Wave Parking Garage through Saturday. You do have to show proof of residency.


Emergency management officials at the shore ask that people don't drive through flooded intersections. They also ask truck drivers that do drive through standing water to slow down to avoid causing a wake.