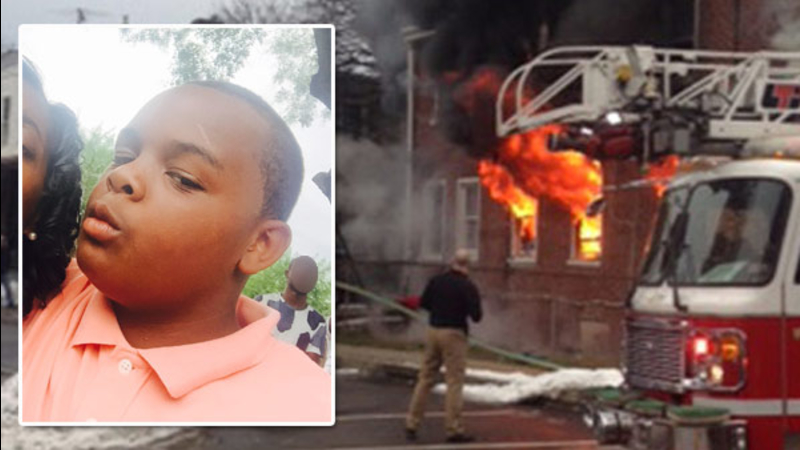 NORRISTOWN, Pa. (WPVI) -- A 12-year-old boy is being remembered as a hero, one day after he died trying to save his father from their burning home in Norristown.

"Not too many grown men would run back in after their family member, and he went back in without thinking about it," said Percy Jones, Norristown Youth Eagles Football.

His bravery doesn't surprise Jones, who heads the football program for which Sanford played for four years.

"I know they had a very close relationship. Every Sunday they went to church together. They always matched, head to toe," said Jones. "When I heard he went back in for his father, I didn't expect anything less from him."

A Montgomery County family is mourning the loss of one of their own.

Sanford's story is striking a chord with many.

Jones says a GoFundMe account the team started has nearly reached its $25,000 goal in just 24 hours. Money he says will help the family who lost their home and a wonderful child.

"Just to get back on their feet. Possibly get a home. I don't know if they were home owners, but if they're not, this could be a down payment for a home," said Jones. "Nothing will bring 'Man-Man' back."

The blaze broke out at 8:54 a.m. Friday inside a three-story, twin home on the 1000 block of Markley Street.

Action News is told crews arrived on the scene to find heavy flames coming from the first and second floors.

Fire officials say there were five family members in the home at the time of the blaze.

Witnesses said some had to jump out windows to survive.

"The family was jumping out the back window," said witness Tree Alexander. "At one point they realized somebody else was in there and they turned and tried to run back in, and the neighbors were actually pulling them back to keep them from coming in because there still weren't any cops here."

But one family member did get back inside - he perished in the fire.

Action News was in Norristown as firefighters battled a deadly house fire.

The deceased is identified as 12-year-old Sanford Harling, nicknamed "Man-Man."

Sanford's grandfather, Kenneth Peterson, said the boy was among the five family members in all who made it out safely, but heroically charged back into the house because his father was unable to scramble to safety right away.

"Once we got out we thought that her husband, his father, was still in there," said Peterson. "His father just had hip surgery, so he can't move around. And 'Man-Man' ran back in there to help his dad. The father ended up jumping out the second floor window. 'Man-Man' got caught up in there."

Firefighters tried to find Sanford, but they were initially beaten back by the flames. They eventually found the boy face down under the kitchen table.

The boy's father was taken to Paoli Hospital suffering from a broken back.

So far, there is no word on the cause of the blaze.

For hours, Sanford's family stood in the freezing morning air grieving over the loss of the brave little boy who thought his dad was in harm's way.

The family lost all of their belongings in the fire, but they never mentioned the material losses - just the loss of the brave child.

Philadelphia Fire Commissioner Derrick Sawyer says chaos during a fire is why families need an escape plan and meeting point.

For example, an escape plan with two routes - a door and a window - and a tree for a meeting place.

Officials say the meeting point helps prevent attempted rescues, and allows initial responders to know if someone is still trapped.

Sawyer says the key though is families must practice the escape plan.

"It is important because in the heat of the battle, we talked about chaos, when that chaos is going on if you haven't practiced it, you're not necessarily going to do what you planned to do," says Sawyer.

All cash donations can be made through the GoFundMe page set up by the Norristown Youth Eagles Football. All gift cards can be dropped off at Eisenhower Science and Technology Leadership Academy, (Eisenhower Middle School) 1601 Markley Street in Norristown, Attn. Principal Taylor.