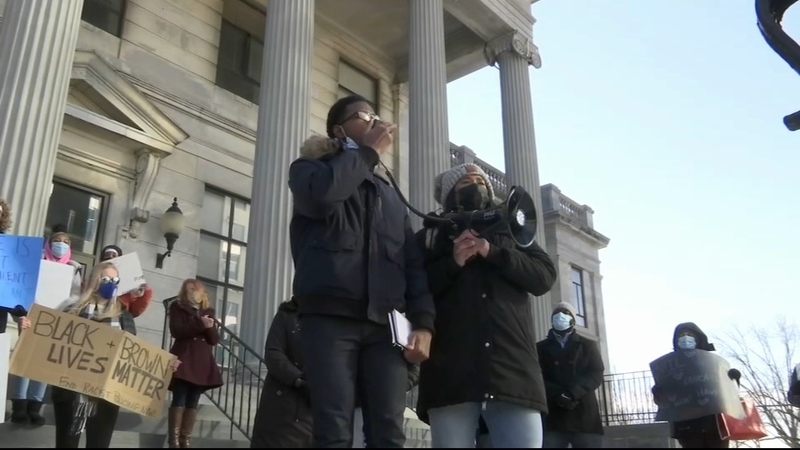 Dozens of people gathered at the Norristown Police Department and marched to the Montgomery County Courthouse. Their message embodied Dr. King's dream of people both young and old, Black and white joining together.

"He talks about not being complacent and continuing to push. We know that our government and people in power are only going to be as good as we demand they be," said Norristown N.A.A.C.P President Angelique Hinton.

Those gathering on Monday wanted to bring light to issues, like ending gun violence, school funding and inequalities in the criminal justice system.

"As he says, we all need to be together and I cannot be silent anymore. We all need to speak if we want justice," said Giselle Knoblauch of Norristown.
Young leaders like Thaddeus Peay, a Bowie State college student, spoke out on the courthouse steps.

"I'm very passionate about education and the fact that Norristown, the district I graduated from, is disproportionately underfunded," said Peay.

He also spoke about the Black Lives Matter movement and said it's more than just police reform.

"It's about confronting oppressive systems that really aren't necessarily police brutality because Black Lives Matter is in all phases, education and law enforcement. You can't just say it when people are out there killing us in the streets," Peay said.

The group is pushing for real action by holding lawmakers accountable, and in the famous words of the late Congressman John Lewis, creating "good trouble."

"I'm here as a local leader to show others that we have to fight even when it's uncomfortable, even when there's fear behind it. You have to stand up and do what's right for your community," said Norristown City Councilman Hakim Jones.
Report a correction or typo
Related topics:
societyphiladelphiamlk daysocietycommunityrace and culture
Copyright © 2021 WPVI-TV. All Rights Reserved.
TOP STORIES
Firefighter on scene of DUI crash killed by drunk driver: Authorities
NYC to require vaccines or weekly testing for city workers
What is Pennsylvania's Move Over Law?
Woman killed, 2 men injured in shooting near Temple U.
30-inch water main break floods South Philly homes
What a reaction! Aussie coach erupts after Titmus gold medal
Hero officers, bystanders save mom, baby pinned under car: video
Show More
Teenager shot on Fishtown basketball court
Fauci: CDC may back wearing face masks more
Vigil held for man shot, killed outside of Pat's King of Steaks
Strangers gift $60K to beloved airport piano player after viral video
LeVar Burton taking over as 'Jeopardy!' guest host Monday
More TOP STORIES News