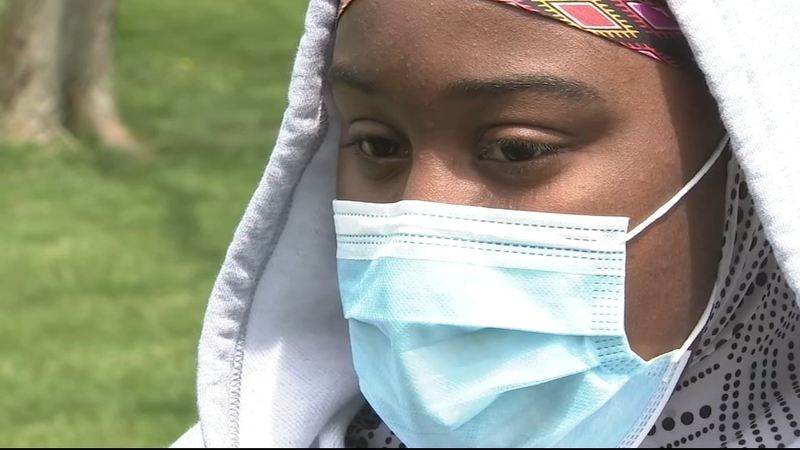 LANSDALE, Pennsylvania (WPVI) -- The North Penn High School student whose hijab was ripped off her head by two other students during a fight said this is not the first time she was targeted because of her religion.

"You are exposing me. You're leaving me naked. I choose to cover myself up for a reason. So, for you to take that off on purpose is blatantly a hate crime," Sanaa Beaufort said.

The 16-year-old and student ambassador at the school in Lansdale, Pa. has rallied support in the midst of an investigation, where Beaufort claims she was the victim of a hate crime.

The fight between Beaufort and two other girls in the school's lunch room was captured on video and posted online.

Beaufort claims during the brawl her hijab, a religious head covering, was torn off by one of the students. The incident occurred during the holy month of Ramadan.

"A hijab to a Muslimah is probably the most sacred and most powerful thing that we have on our body," Beaufort said.

She said the tensions between she and the pair that attacked her had been brewing for weeks, and that reports to school administrators about the tensions went unnoticed.

The teen said she had called out the girls before for using racial slurs.

All of it escalated on Tuesday as she exited a bathroom.

Beaufort said one of the girls aggressively ran into her, which sparked the confrontation.

"As they were hitting me and taking off my hijab they kept continuously saying, 'I got you now,'" Beaufort said.

Even more upsetting to her mother and groups like the NAACP, was that after the fight, the teen was walked out of the room without her hijab.

"She was dragged through a lunchroom and no one offered her shield, during the holiest month of the year," said her mother Atiba Wilkins.

The North Penn School District posted a statement on its website noting its actions to investigate the incident and acknowledged and apologized, noting "we could have done a better job in helping the student retrieve her hijab."

The Philadelphia chapter of the Council on American-Islamic Relations is now involved and has agreed to represent the teen.

Police said they are looking at other videos of the fight, and are asking more witnesses to come forward.

Read the full statement release from the school below:
"The North Penn School District continues to investigate the altercation involving three students at North Penn High School on Tuesday, May 4th, and is aware of cellphone videos of part of the incident circulating throughout social media. We take seriously the comments, reactions and feelings that are being represented by those on social media and others reaching out to the school district and school.