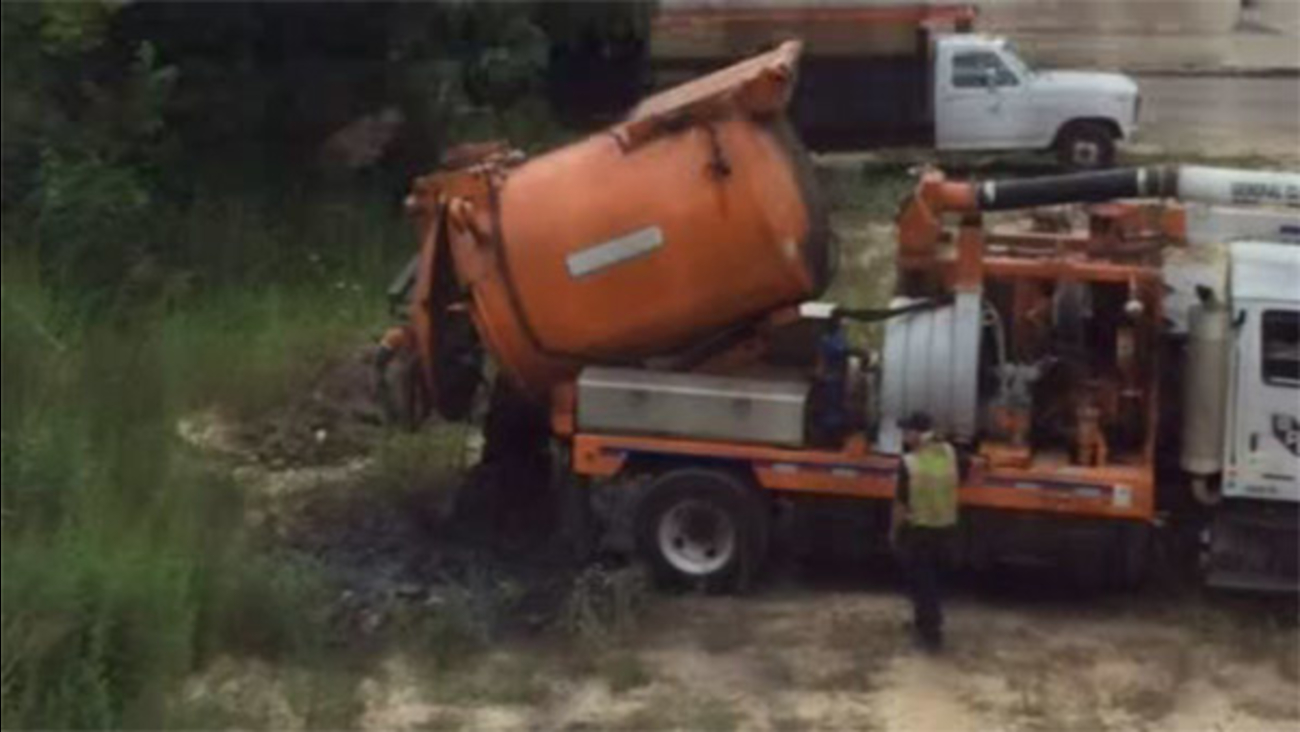 NORTH PHILADELPHIA (WPVI) -- Imagine if someone came into your neighborhood and dumped some foul smelling sludge in a vacant lot across from your home?

Well that's exactly what happened to one North Philadelphia homeowner and she was absolutely stunned.

"And I was in such a shock, I didn't reach for any of my devices, I was frozen," said Donna Collier.

Over the years, Collier has seen people from out of town come here and dump tires and trash.

However she was left breathless this week when she saw men, whom she recorded on her iPad, dumping a foul-smelling, sludge-like material across from her home at the intersection of Diamond and Stillman streets.

"It's a foul odor, and then once they emptied the truck, they washed the drum down and as they were washing the drum down, streams of black soot just started coming through the field and unto Stillman Street," said Collier.

Moments later, the video shows children walking up to the spillage, curious as you what it was. They play in the vacant lot and had seen the men dump the substance there.

"It's a lot of nerve, you know, these kids they ride their bikes through this field," said Collier.

The company doing the dumping was General Pipe Cleaning in the suburbs of Sharon Hill.

Action News asked the owner why they were allowed to do this?

"The contractor who we were working for," said McErlean.

McErlean, the business owner, says the material being dumped came from the storm drainage inlets.

He says the contractor who allegedly told him to dump the material there is Donato Spaventa & Son in Juniata.

Action News was unable to reach them for comment.

However the Philadelphia Water Department says Spaventa had been hired as part of an environmentally-friendly infrastructure project.

As for the dumping in the vacant lot, Deputy Commissioner Debra McCarty said in a statement, "It is nothing we would ever authorize. Totally unacceptable. We not condone this and we will get to the bottom of this."

Councilman Clark was outraged after seeing the video of the dumping which took place in his district.

"They're dumping in a lot which is illegal. Three, they give you this story about they probably got authorization and that doesn't seem to be the case," said Councilman Clark.

Out of concern for the safety of residents, the city has removed the material and is having it analyzed to determine if it contains hazardous or toxic materials.

"We're prepared to the fullest extent, we're allowed to go after this individual. In addition of which, if we find out there is potentially some toxins in that particular debris, there could possibly be some criminal implications," said Councilman Clarke.

Both the city and the water department are conducting investigations.