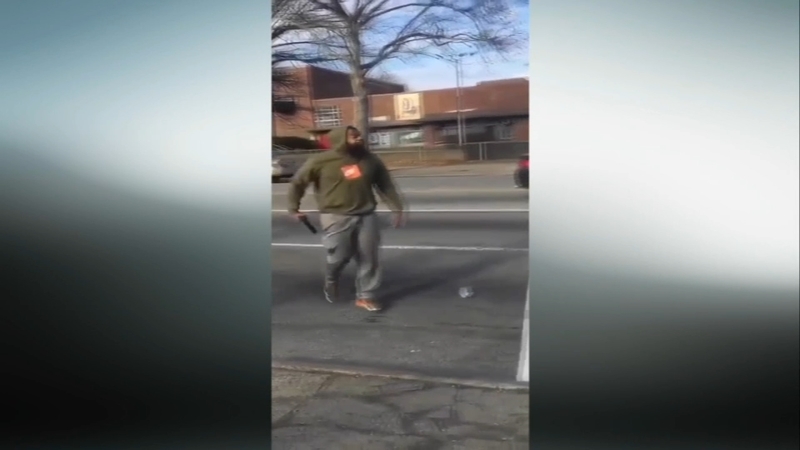 PHILADELPHIA (WPVI) -- A fight outside of Northeast High School in Philadelphia on Tuesday was captured on cell phone video.

It appeared to be between students. But just seconds into the video, an unidentified adult is seen getting involved, pulling out what appears to be a gun and yelling at the students.

The group scatters and the video ends. Students say it's disturbing to watch and they immediately thought about their safety.

"They were scared. He pulled out a gun and they thought he was going to shoot it," said student Justin Caraballo.

"It could have been one of us. Plus, I am in the trailers outside and that is like not close to the school, and the door is unlocked, so we have no chance to escape," said student Isaiah Coloo.

We showed parents the altercation and many say their hearts were pounding watching the violence. They were even more shocked to see an adult getting involved and flashing a weapon. Some didn't want to be identified, but were willing to talk.

"Anyone of them could have gotten hurt, then it would have been a tragedy and would have been a whole other situation. Lord forbid something would have happened to one of those kids and then another parent loses a child," one parent told Action News.

The school says the incident happened after school hours and is alerting parents through phone calls and emails. Both the school district and police are investigating.

Northeast High is asking any students concerned about their safety to contact a staff member or police immediately.

It's not clear what prompted the fight or who all was involved but parents and students tell Action News they are thankful no one was injured.

"To me, that is really scary. Knowing that my son takes the bus, it could have been an episode and something went overboard and he could have been standing here waiting for the bus," said parent Ganese Sterling.