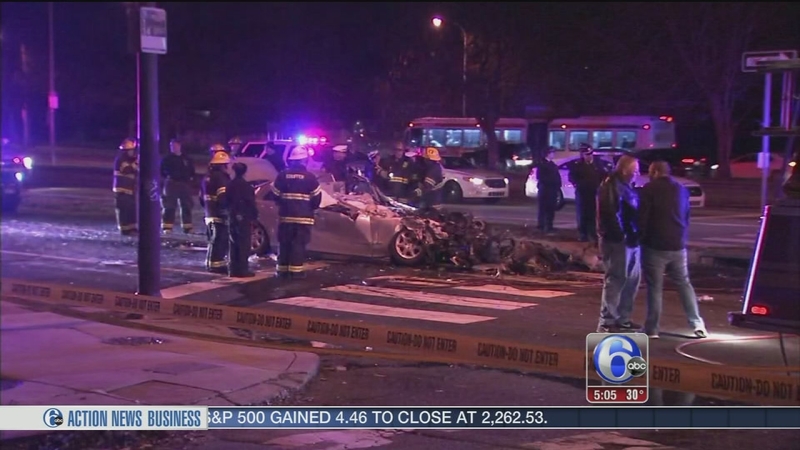 NORTHEAST PHILADELPHIA (WPVI) -- Police have identified the two people who were killed after a car slammed into the back of a school bus on Roosevelt Boulevard in Northeast Philadelphia.

The victims have been identified as 32-year-old Ramon Rodriguez-Camacho and 38-year-old Lorraine Rivera, both from Tioga Street.

The crash happened around 9 p.m. Sunday.

Police say the driver of a Mercedes, identified as Rodriguez-Camacho, was traveling well over the 45 mph speed limit going northbound on the outer lanes of Roosevelt Boulevard, approaching Woodward Street.

The school bus, which belongs to the Huntingdon Valley Christian Academy, had just dropped off some two dozen children at a church just minutes before.

That bus later stopped at a red light in the middle northbound lane when the Mercedes rear ended it, going underneath the bus.

A witness tells us he ran to the vehicle, along with several other men, and tried to yank open the door to at least save the female passenger, identified as Rivera. But the flames started to engulf the vehicle.

"It rear-ended the school bus with such impact it caused the Mercedes to go underneath the rear bumper of the school bus, and that impact apparently killed both the male driver and the female passenger. They were killed instantly," said Philadelphia Police Chief Inspector Scott Small.

"I knew that under that car there were dead bodies because there was no way someone could survive getting squished by that car," witness Fares Yasin said.

Two off-duty officer told investigators they saw the Mercedes speeding up the Boulevard at a rate of speed far exceeding the 45 mph hour limit.

There were no other injuries, and the 40-year-old female bus driver refused any medical assistance.