'It gets me mad' - President Obama acts alone on gun control 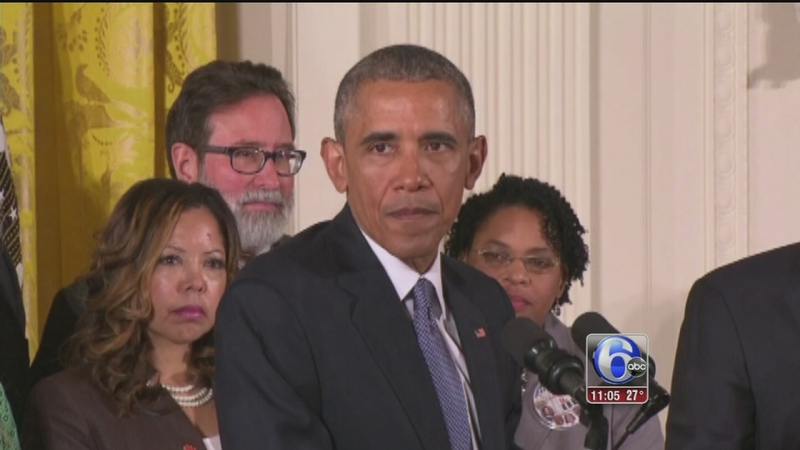 WASHINGTON -- Tears streaking his cheeks, President Barack Obama launched a final-year push Tuesday to tighten sales of firearms in the U.S., using his presidential powers in the absence of tougher gun restrictions that Congress has refused to pass.

The president struck a combative tone as he came out with plans for expanded background checks and other modest measures that have drawn consternation from gun rights groups, which Obama accused of making Congress their hostage. Palpable, too, was Obama's extreme frustration at having made such little progress on gun control since the slaughter of 20 first-graders in Connecticut confronted the nation more than three years ago.

"First-graders," Obama said woefully, resting his chin on his hand and wiping away tears as he recalled the 2012 massacre at Sandy Hook Elementary School. "Every time I think about those kids, it gets me mad."

Obama's 10-point plan to keep guns from those who shouldn't have them marked a concession by the president: He'll leave office without securing the new gun control laws he's repeatedly and desperately implored Congress to pass.

Although Obama, acting alone, can take action around the margins, only Congress can enact more sweeping changes that gun control advocates say are the only way to truly stem a scourge of mass shootings.

A visibly emotional President Barack Obama unveiled his plan Tuesday to tighten control and enforcement of firearms in the U.S.

The centerpiece of Obama's plan is an attempt to narrow the loophole that exempts gun sales from background checks if the seller isn't a federal registered dealer. With new federal "guidance," the administration is clarifying that even those who sell just a few weapons at gun shows, flea markets or online can be deemed dealers and required to conduct checks on prospective buyers.

Whether that step can make a significant dent in unregulated gun sales is an open question, and one not easily answered.

Millions of guns are sold annually in informal settings outside of gun shops, including many through private sales arranged online. But the Obama administration acknowledged it couldn't quantify how many gun sales would be newly subjected to background checks, nor how many currently unregistered gun sellers would have to obtain a license.

Easily reversible by a future president, the government's guidance to gun sellers lacks the legal oomph of a new law, such as the one Obama and likeminded lawmakers tried but failed to pass in 2013. The Justice Department said online the guidance "has no regulatory effect and is not intended to create or confer any rights, privileges, or benefits in any matter, case, or proceeding."

What's more, none of the steps would have probably prevented any of the recent mass shootings that Obama invoked in the East Room: Aurora, Oak Creek, Charleston, Newtown, to name some. But Obama defiantly rejected that critique, dismissing it as the tired trope of gun lobbyists who question "why bother trying?"

"I reject that thinking," Obama said. "We maybe can't save everybody, but we could save some."

Hoping to give the issue a human face, the White House assembled a cross-section of Americans affected by searing recent gun tragedies, including former Rep. Gabrielle Giffords. Mark Barden, whose son was shot to death at Sandy Hook Elementary School, introduced the president with a declaration that "we are better than this."

Obama readily conceded the executive steps will be challenged in court, a prediction quickly echoed by Republicans.

Chuck James, a former federal prosecutor who practices firearms law at the firm Williams Mullen, said opponents are likely to challenge Obama's authority to define what it means to be "engaged in the business" of selling guns beyond what's laid out in the law. The White House asserted confidence Obama was acting legally, and said Justice Department and White House lawyers had worked diligently to ensure the steps were watertight.

Other new steps include 230 new examiners the FBI will hire to process background checks, aiming to prevent delays that enabled the accused gunman in Charleston, South Carolina, to get a gun when the government took too long.

Hillary Clinton and Bernie Sanders, both competing for the nomination from Obama's party, pledged to build on his actions if elected. The Republican field formed a chorus of voices vowing to annul the whole package, with Marco Rubio claiming "Obama is obsessed with undermining the Second Amendment."

"Rather than focus on criminals and terrorists, he goes after the most law-abiding of citizens," said House Speaker Paul Ryan, a Republican. "His words and actions amount to a form of intimidation that undermines liberty."

The National Rifle Association, the largest gun group, panned Obama's plan and said it was "ripe for abuse," although the group didn't specify what steps, if any, it will take to oppose or try to block it.

Reach Josh Lederman on Twitter at http://twitter.com/joshledermanAP. His work can be found at http://bigstory.ap.org/author/josh-lederman