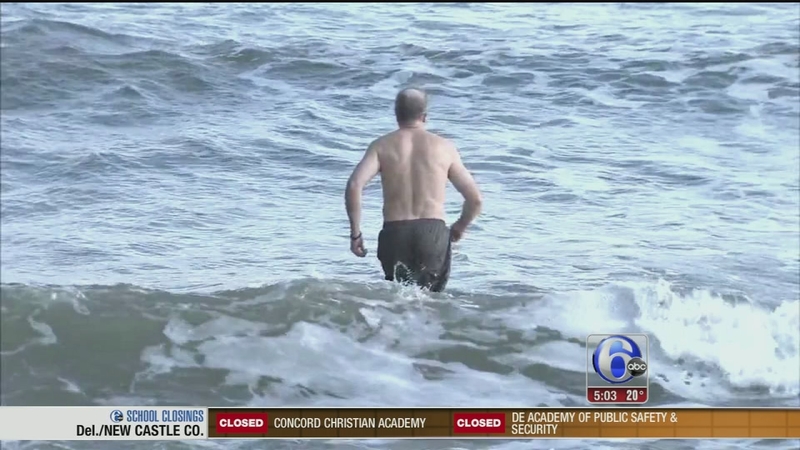 OCEAN HEIGHTS, N.J. (WPVI) -- Some may call him crazy but Doug Maday, of Ocean Heights, is continuing his quest to swim in the ocean every day for a year - even if the water is 36 degrees and the wind chill it feels like 1 degree outside.

"You see the people in the polar bear plunges, they take a running leap and dive in. I can't do that, I have to just ease in," said Maday.

Maday began his daily swims September 1st, hoping to create an endless summer - but dipping in the nearly freezing water?

"This is gonna sound strange but it's kind of a relief because the water is warmer than the air. Now getting out is the hard part because then I go back to the cold," said Maday.

Maday wouldn't be able to swim in the Toms River lagoons. They're frozen solid after the prolonged plunge in temperatures.

Michelle Adkinson is living on her boat called High Bid this winter.

"Actually it's not so bad, we have heaters on the inside. We can get the boat up to 85 degrees inside if we really want to," said Adkinson.

Bubblers keep the water right around the vessel from freezing.

Adkinson's dogs don't mind the bitter cold. Boo-boo the bulldog loves to bury his face in the snow and snack on it.

One good thing about the subfreezing temperatures? They may help get rid of the southern pine beetles that have been destroying thousands of acres of trees in South Jersey.