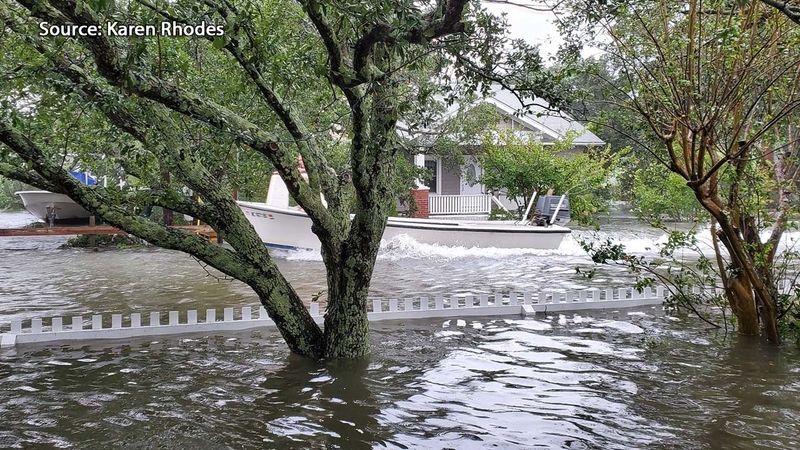 OCRACOKE, N.C. -- As Hurricane Dorian continues to move through North Carolina, hundreds are feared to be trapped in 'catastrophic flooding' conditions on Ocracoke Island.

In a Friday morning news conference, Governor Roy Cooper gave an update on the status of eastern and central North Carolina being affected by Hurricane Dorian.

"The danger right now is the rising storm surge of 4 to 7 feet and flash floods as the hurricane churns along the coast," he said.

Hurricane Dorian continues to move through North Carolina, hundreds are feared to be trapped in 'catastrophic flooding' conditions on Ocracoke Island.

Hyde County Sheriff's Office said it was responding to reports of "catastrophic flooding on Ocracoke Island."

Flash flood emergencies have been issued for Dare and Hyde counties. Cooper said officials are telling people to get to the highest point in their houses.

"There is significant concern about hundreds of people trapped on Ocracoke Island," Cooper said. "This latest development shows that we cannot yet let our guard down."

Ocracoke Island resident Leslie Lanier said some residents on the thin strip of land on North Carolina's coast have had to climb into their attics due to high water from Hurricane Dorian.

Lanier said via text message Friday morning that some first floors have been flooded. But she added that the water level has started to drop. Lanier owns a bookstore on the Outer Banks island. She said she's OK but "nervous and worried."

According to ABC11 Meteorologist Don "Big Weather" Schwenneker the flooding should not totally be blamed on the rain from Hurricane Dorian. He said the storm dropped about 6.5 inches of rain on Ocracoke.

The flooding is mostly due to Hurricane Dorian's wind, which caused storm surge that backed up and flooded the island. Official numbers for the size of the storm surge have not yet been released.

Dorian came ashore Friday morning at Cape Hatteras on North Carolina's Outer Banks, but it had been pummeling the coast for hours before that.

We're getting some pictures and videos of the severe flooding due to storm surge on the Outer Banks. This is Ocracoke, NC. Our hearts go out to ALL impacted by #Dorian. #nws pic.twitter.com/OAVxjJkUjj