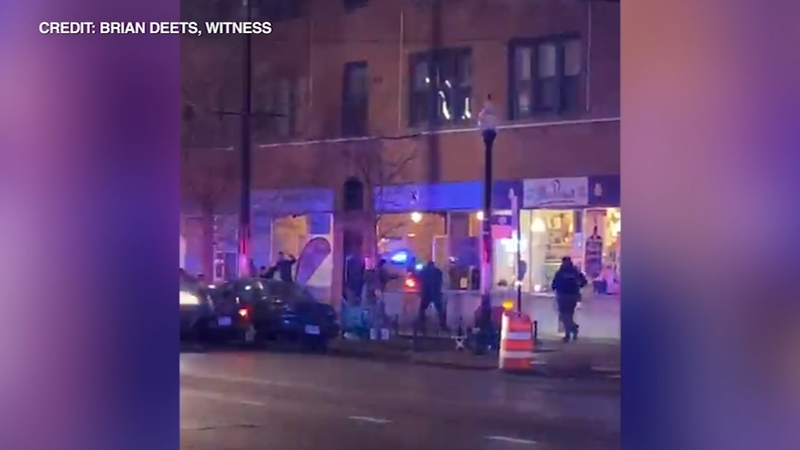 CHICAGO (WPVI) -- A Chicago police officer remains hospitalized Wednesday after being shot in the head following a bank robbery in Des Plaines and chase that ended on the Northwest Side.

The bank robbery suspect was fatally shot and a teenager who was at the scene was also wounded.

It started with a bank robbery Tuesday in Des Plaines, with police taking one suspect into custody and a second suspect escaping after stealing a car at gunpoint.

FBI agents and Des Plaines police chased the suspect down the Kennedy Expressway and alerted Chicago police. CPD officers were waiting when the suspect exited the expressway at Irving Park Road shortly before 7 p.m., police said.

"Upon seeing CPD, the offender fired at the vehicles at which time a Chicago police officer suffered a graze wound to the temple of his head in the exchange," Chicago Police Superintendent Eddie Johnson said.

Witnesses described a chaotic scene as a Chicago police officer and a teenage bystander were wounded in a shootout with a bank robbery suspect on the Northwest Side.

Police later revealed the officer's injury was much more serious than first thought. The bullet actually penetrated and exited his skull and he has a skull fracture and bleeding on the brain.

The 46-year-old officer remains hospitalized at Illinois Masonic Hospital in serious but stable condition. Police said he is a highly decorated 17-year veteran of CPD who works out of 17th District in Albany Park.

The chase ended in the 4200-block of Irving Park Road. Witnesses said police rammed the suspect's car. He then ran into a music store where he exchanged gunfire with a Des Plaines police officer.

Authorities said the 32-year-old suspect was killed during the gun battle. Johnson said CPD officers did not fire any shots during the exchange of gunfire.

The officer that was shot during gun battle with bank robbery offender is #ChicagoPolice. Superintendent Eddie Johnson has been notified & is en route to Illinois Masonic. Scene is extremely chaotic and we will update media at a hospital briefing later. pic.twitter.com/b7RrKIHOHy

During the chaos, a 15-year-old boy who is a student intern at the music store, was shot in the arm and abdomen. He was transported to Comer Children's Hospital, where his condition later stabilized.

The store, UpBeat Music and Art, said in a statement in part, " Class was session at the time, and all other students and staff were kept safe, thanks to the quick and courageous efforts of our teachers."

"Our thoughts and prayers go to our student intern, and his family, the students and families impacted by this devastating event, as well as the Chicago police officer who was shot earlier in the pursuit."

The store said classes would be canceled Wednesday.

Bystanders and commuters scrambled for cover as a chorus of police sirens roared into Irving Park just before 7 p.m.

"A lot of people started running away, just fearing for their life," said Bryan Lewis, witness.

"The bus driver pulled over about the middle of the block, next thing I know I heard pop, pop!" said Brian Deets, witness.

Witnesses said police appeared to be chasing a white car, which they rammed. That's when witnesses said the driver bailed out, armed and ready.

"He hops out of the car and starts shooting immediately," Lewis said.

Chicago Mayor Lori Lightfoot tweeted a statement Tuesday night, saying in part, "Tonight, our hearts are breaking as we're reminded of the service and sacrifice our officers make every day to protect us and keep our communities safe."

Tonight, our hearts are breaking as we're reminded of the service and sacrifice our officers make every day to protect us and keep our communities safe. We're monitoring the situation, and Amy and I are asking all Chicagoans to pray for the CPD officer who was shot this evening.