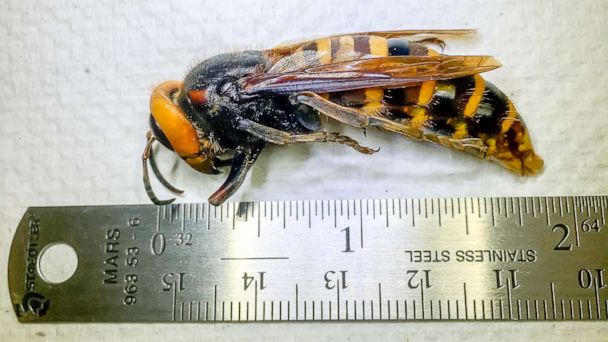 Officials in Washington state are rushing to capture a dangerous species of invading "murder hornets" before they begin to mate and multiply at the end of summer.

Officials said they captured an Asian giant hornet in Whatcom County using a bottle trap on July 14, confirming a potentially dangerous invasion in the state, the Washington state Department of Agriculture announced Friday.


So far, there have been at least six confirmed sightings of the dangerous hornet in the state, but the previous five were all found in the wild, whereas the recent find was the first captured in a trap, officials said Friday.

The hornet located in Whatcom County was about 6 miles from the one found in Blaine. A nest was destroyed in British Columbia last December.

The Asian giant hornet is more likely to be seen in August and September, officials said.

"This is encouraging because it means we know that the traps work," Sven Spichiger, managing entomologist for the Department of Agriculture, said in a press release. "But it also means we have work to do."

The department said it wants to contain the invasion before mid-September, when the queens begin to mate to produce a new crop of worker hornets, the statement said.


State officials announced plans to deploy as many as 40 live traps in the Birch Bay area of Whatcom County to help eradicate the hornets. They will check the traps daily and use sightlines to follow any hornets back to the coveted nest.

The state is also working with trackers, which they have already tested on local species, to help locate the nest by early to mid-September. If located, they'll began the dangerous process of eradicating the massive insects.

This process will likely be carried out at night as the area around the nest must be kept clear.

The adult hornets, which can be 2 inches long, earned the name "murder hornets" because they decapitate native honeybees. Though they generally aren't a danger to humans their stings can be painful.