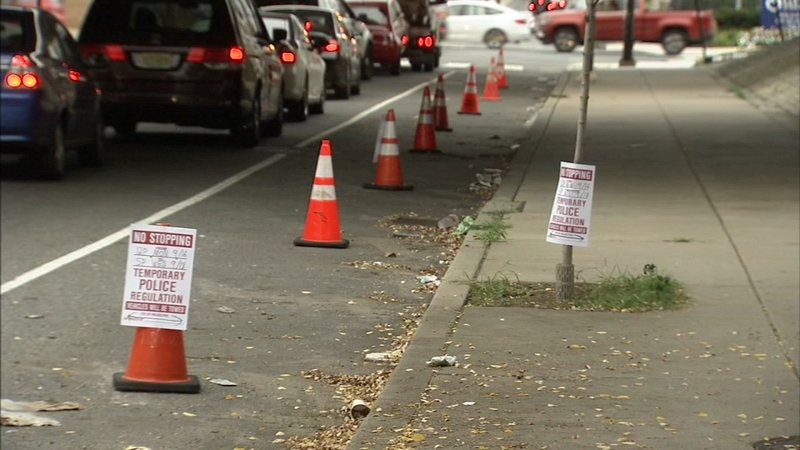 PHILADELPHIA (WPVI) -- Orange cones line the streets in the Old City section of Philadelphia for the filming of TV series 'Dispatches from Elsewhere,' and many who live in the area are fed up.

Philadelphia Parking Authority tow trucks were busy most of Monday evening towing vehicles from the streets. Something that caught many by surprise.

Rob Rodriguez was just getting off work when he noticed a tow truck driver about to tow his vehicle.

Fortunately, Rodriguez got there just in time.

Apparently, he did not see the signs posted by the production company warning people not to park in a number of streets in Old City from noon Monday until 5 p.m. Wednesday.

"There were no signs," Rodriguez said.

Perhaps somebody was taking down the signs or people didn't realize what the signs were about.

As a result, many people ended up parking in the restricted zones. By late afternoon, many of the signs were being replaced by official police department signs telling people not to park there or they would be towed.

All of this was not sitting well with many of those who live or work in the area, well-versed in the nuances of parking in Old City or lack thereof.
"There's already no parking around here so gonna have to find somewhere else to go," said Ryan McNesby.

"It definitely makes it more difficult. I've never seen this many blocks in a row like blocked off that I can remember living in the city for 15 years," said Howard Pinder

The Greater Philadelphia Film Office, which has seen a boom in TV shows and movies being filmed here, is sympathetic to those being impacted by the parking restrictions.

"We know that taking up parking is an inconvenience to everyone, but we try very hard to limit it as much as possible," said Sharon Pinkenson, executive director of the Greater Philadelphia Film Office.

She said vehicles are being towed to other areas nearby.

"We don't tow them to the tow lot, we tow them to the next closest space," she said.
Still, we saw some motorists getting parking tickets who parked in the restricted zones.

"I have parking in a lot for this reason cause I don't want to be bothered by any issues or parking on the street," said Abiance Carter.