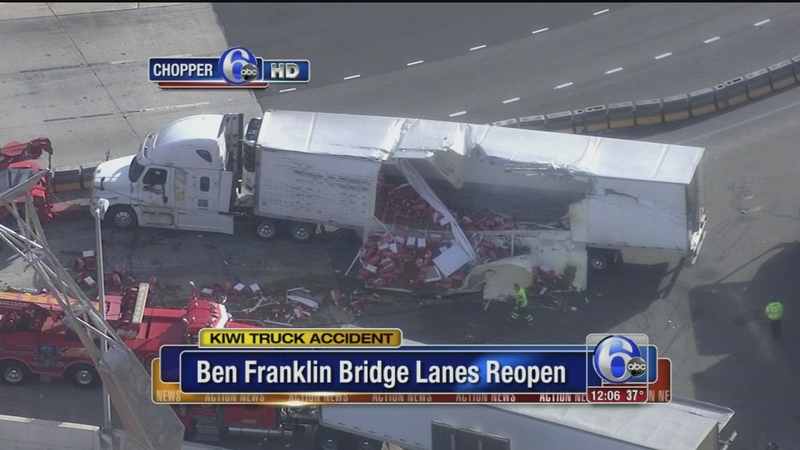 The big rig carrying kiwi fruit overturned at 8:30 p.m. Wednesday in the westbound lanes coming off the Ben Franklin Bridge.

At approximately 9:00 a.m. Thursday, crews began removing the trailer from the roadway.

While the bridge remained opens, all westbound traffic was being diverted off at 5th Street.

All lanes were reopened shortly after 11:00 a.m.

Earlier Thursday, another tractor-trailer was brought in to off-load the truck's cargo.

Wednesday night's crash initially forced three lanes to merge into one, and drivers were diverted off at the 5th Street exit for several hours.

Barriers were set up around the wreckage, and all but the left lane were back open by 11:00 p.m.

The truck remained on the scene all night as the process of unloading and righting it dragged on.

A speed restriction of 25 mph went into effect for the westbound Ben Franklin Bridge, out of safety concerns for motorists coming off the bridge and approaching the accident scene.

Westbound traffic approaching the scene was backed up across the Ben Franklin Bridge throughout the Thursday morning rush hour.