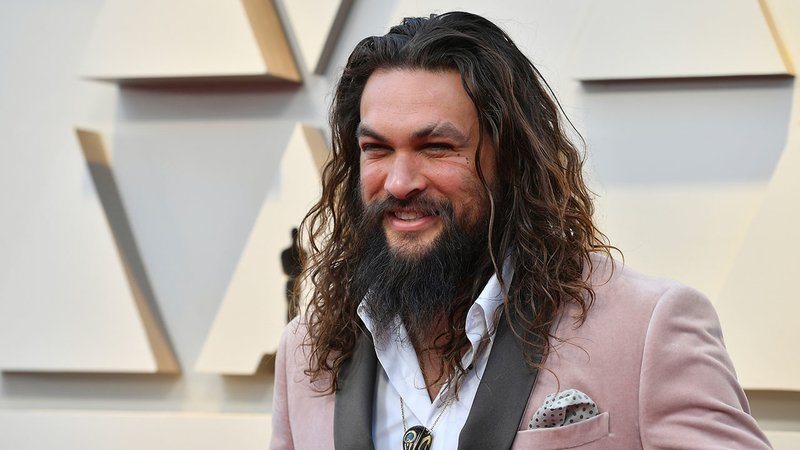 Actor Jason Momoa lifted the pastel for his Fendi tuxedo, a custom look designed by the late Karl Lagerfeld.

"He designed Jason's tux personally for him. This is from his last couture collection for Fendi," Bonet told MTV News during a red carpet interview.

But that wasn't the only reason Momoa's threads turned heads.

In fact, the smallest accessory Momoa rocked appeared to grab the most attention. The Hawaii native sported a matching pink Fendi scrunchie on his right wrist.

Before he passed away, Lagerfeld lent his creative genius to the accessory, too, which had its own mini Fendi label.

Naturally, fans expected Momoa to tie back his luscious locks with the hair piece.

I'll just be here, waiting for Jason Momoa to put that scrunchie in his hair pic.twitter.com/wH3sriU1kV

Jason Momoa’s matching scrunchie is such a mood #oscars pic.twitter.com/NkmP20V7PT

jason momoa in a pink suit? with a matching scrunchie? ohmygod. Y’ALL, THIS IS A MAN. pic.twitter.com/CTMoMaCmUv

Some fans were so impressed, they were already calling for him to host next year's Oscars.

In the midst of making people swoon over the scrunchie slung on his wrist, Momoa also managed to throw "Game of Thrones" fans into a frenzy, with he and Bonet posing alongside co-star Emilia Clarke.

The velvet tuxedo was a go-to for other men of style at the Academy Awards, including "Black Panther" and "Creed" star Michael B. Jordan and Tony and Grammy award winning actor Billy Porter, who wore a full-fledged custom couture tuxedo dress by Christian Siriano.

"When you come to the Oscars, you must dress up," Porter said.

Michael B. Jordan and Donna Jordan hit the red carpet ahead of the 2019 #Oscars. https://t.co/SnhY0riMTA pic.twitter.com/h7KvmWj0zT

When you come to the Oscars, you must dress up. Thanks @CSiriano for creating this custom couture masterpiece. @OscarHeymanBros you have outdone yourselves with your iconic jewels. Style by @sammyratelle Grooming by Anna Bernabe. @TheAcademy #AcademyAwards2019 #oscars #oscars2019 pic.twitter.com/IpTG2OK20x

Leave it to the men to surprise us and seemingly make us want to wear a scrunchie at the same time.

Excuse us while we head to the closet accessory aisle.