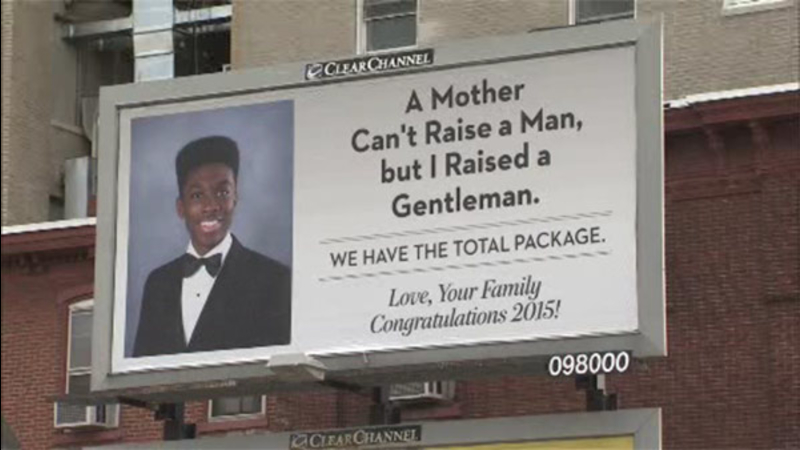 CAMDEN, N.J. (WPVI) -- Ovella O'Neal is one proud mom and she wants everyone in Camden, New Jersey to know it.

The high school graduate smiling on the billboard at 7th and Cooper streets is her son Aljelani Igwe, known as AJ for short.

The writing on the billboard has deep meaning for the single, working mom of six.

"I said, 'A mother can't raise a man but I raised a gentleman. We have the total package,'" said O'Neal.

O'Neal wants other moms to take note and responsibility.

"For the males to be respectful to women, that was the meaning for men and to try to break the barrier of single parenting and it starts at home," said O'Neal.

"I don't know too many moms that would've done this for their children," said AJ.

O'Neal bought the billboard for $700 and it will stay up for several weeks.

She surprised her son with the gift for his graduation from Leap Academy Charter School.

AJ says he had mixed emotions.

"I was kind of nervous. I don't like to be put on the spot a lot but at the same time I was happy," he said.

"He's a young male and he made it through the whole downfall of Camden - the bad rap I should say of Camden," said O'Neal.

O'Neal, a Camden native, knew she had to be strict with AJ in order for him to take the right path in a city plagued with drugs, crime and low graduation rates.

But now, she's not the only proud one in their house.

"I'm very proud of my mom - that she was able to raise us all up as young adults and by herself basically," said AJ.

Does he think she deserves a billboard?

What's next for AJ?