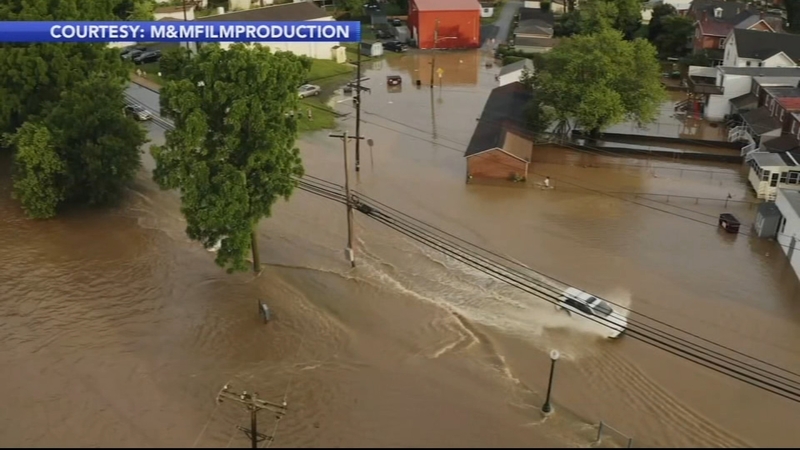 In Kerr Park in Downingtown, Chester County, the East Branch of the Brandywine Creek overflowed its banks Tuesday and flooded the roadway.

The creek crested at 12.36 feet at 9:30 p.m. Tuesday which was considered major flood stage. The floodwaters receded by Wednesday morning.

MAJOR FLOODING
Along the East Branch Brandywine Creek in Downingtown. The creek is currently at 12' feet in major flood stage and expected to rise to 13.2' later this evening before falling back below flood stage tomorrow morning. This would be a top 10 crest. pic.twitter.com/vjhjUN0Dz5

It's a different story in Chadds Ford, Delaware County where the floodwaters have not yet receded.

The National Weather Service says the Brandywine Creek will crest at 11.2 feet. Flood stage is 9 feet. A flood warning for this part of the area continues until 5 p.m. Wednesday.

Firefighters rescued one person from a vehicle that was stuck in the floodwaters.

SB lanes of Baltimore Pike by Creek Rd in Chadds Ford closed for flooding. A person was just helped out of a stuck vehicle. pic.twitter.com/rCWakFTGjn

The heavy rain caused a few other water rescues during the height of the storm, but no injuries have been reported.

It was the same series of storms that brought down a bunch of trees in Birmingham Township, Chester County.

"It sounded like a freight train, just really loud noise. I've never been in a tornado before, but if this is what it is, it's terrifying," said resident Mark Bergkvist. "I could see the rain going by me horizontally but couldn't see any further."

And in Thorndale, the storm left some drivers stranded at businesses during the evening rush.

The storm even forced the closure of the Route 30 bypass between Coatesville and Downingtown.


This is in Coatesville in my district right now. pic.twitter.com/g4NO5kVgzv