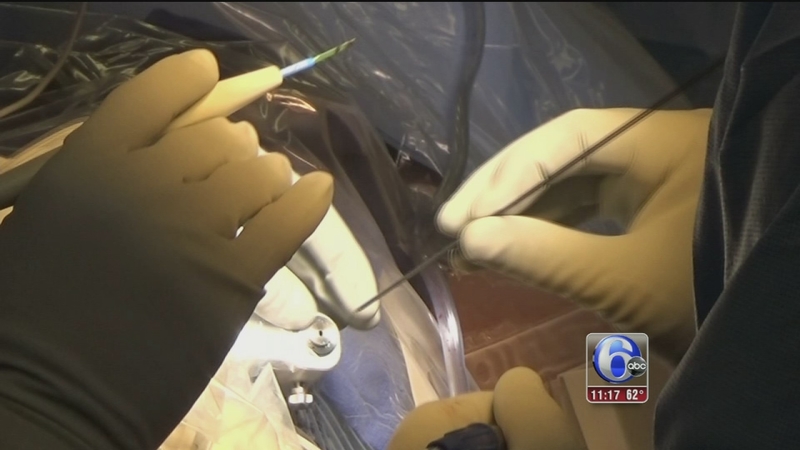 There is new hope for some people who suffer from Parkinson's disease.

Advances in technology are making one procedure on the brain easier for patients and, for many, the results are remarkable.

In the past, the only way doctors could perform the surgery was with the patient awake. But now doctors at Jefferson University Hospital can perform it while patients are asleep and much more comfortable.

Action News spoke with one man who says having this option helped him get his life back.

69-year-old Jim Fox is now back to doing what he loves, building boats from the ground up.

"It feels like a dream come true," Fox said.

A dream come true because about six months ago, Fox couldn't get up or down stairs.

He could barely hold a cup of coffee due to tremors caused by Parkinson's disease.

"Both my arms shook, my hands shook, but the worst part was my jaw shook severely," Fox said. "Life was very unbearable."

And he says medication wasn't working much anymore.

That's why he chose to have a device implanted in his chest and connected to thin wired electrodes surgically placed in his brain.

It's a procedure called Deep Brain Stimulation, or DBS. It's helping relieve his tremors.

To get an idea what life was life before the procedure, Nurse Practitioner Anne Coste turned down his device on one side and immediately the tremors returned.

When she turned it back on, the tremors slowly subsided.

With DBS, electrodes are placed on specific areas of the brain delivering stimulation that helps control symptoms.

Dr, Chengyuan Wu at Jefferson is now doing DBS while patients are asleep.

Traditionally, patients are kept awake which as you can imagine can spark fear.

"I mean it scared the devil out of me. I wouldn't have done it," Fox said.

"Six to seven hours fixed to a table, not being able to move, nobody is going to like that especially if you have Parkinson's, that's extremely taxing," Wu said.

But Dr. Wu says due to advances in MRI imaging, surgeons now have a clearer view to map the exact spots for the electrodes.

"The analogy I give is if you are looking for a box in the basement, you can go around and feel for the right box, but we have a light switch now that we can turn on the light and see exactly where it is," Wu said.

Mr. Fox's symptoms have improved by more than 50-percent.

As with all procedures, there are risks, but Dr. Wu says the risks are low and the asleep version is safer.

It also takes about two hours less in the operating room.

But this is not for all Parkinson's patients and it's only done when medication is no longer working well.

DBS can also be used to treat essential tremor, dystonia and Obsessive-Compulsive Disorder.