While the airline decided not to identify the pilot, saying only that the employee has years experience on the job, passengers posting on social media identified her as Tammie Jo Shults.

She was calm, cool and collected, they said, safely landing the plane with 144 passengers and 5 crew members on board despite the loss of one of its engines and a shattered window in the cabin. One person was killed in the incident.

"We are instructed to brace yourselves, from a very frantic voice, 'brace yourself, brace yourself.' I look out of my window and I see this city that was foreign to me, it didn't look like New York City. I felt like I could touch the tops of the skyscrapers in Philly," said passenger Marty Martinez.

1 dead after jet blows an engine; woman nearly sucked out. Dann Cuellar reports during Action News at 11 p.m. on April 17, 2018.

Another wrote, "(She) came back to speak to each of us personally. This is a true American hero. A huge thank you for her knowledge, guidance, and bravery."

Shults is said by a friend to be "doing fine" and concerned about the family of the sole fatality in Tuesday's incident.

Action News talked to a former pilot, Craig Johnston, about the dangers in the air and how pilots respond during emergency situations, similar to the one on flight 1380.

"In a depressurization situation, it's a pretty dramatic event inside the plane. You've got a lot of noise, you've got papers and things flying around, it gets very cold, there's a fog in the cabin as the airplane depressurizes. It's a confusing situation back there as well," said Johnston.

Action News has learned that Shults was among the first female fighter pilots for the U.S Navy. She was commissioned in 1985 and left active duty service in 1993.

One passenger on Flight 1380 says after the plane landed, Shults came back to speak to each person personally. They called her a true American hero and thanked for her knowledge, guidance and bravery.

While he did not single out the pilot, Southwest CEO Gary Kelly praised all the crew members, saying, "They did their jobs superbly today."

He called the incident a tragic loss while praising the crew for landing the aircraft without further loss of life.

One passenger, Jennifer Riordan, a Wells Fargo bank executive and mother of two from Albuquerque, New Mexico, died after being partially pulled out of the plane after a cabin window shattered. 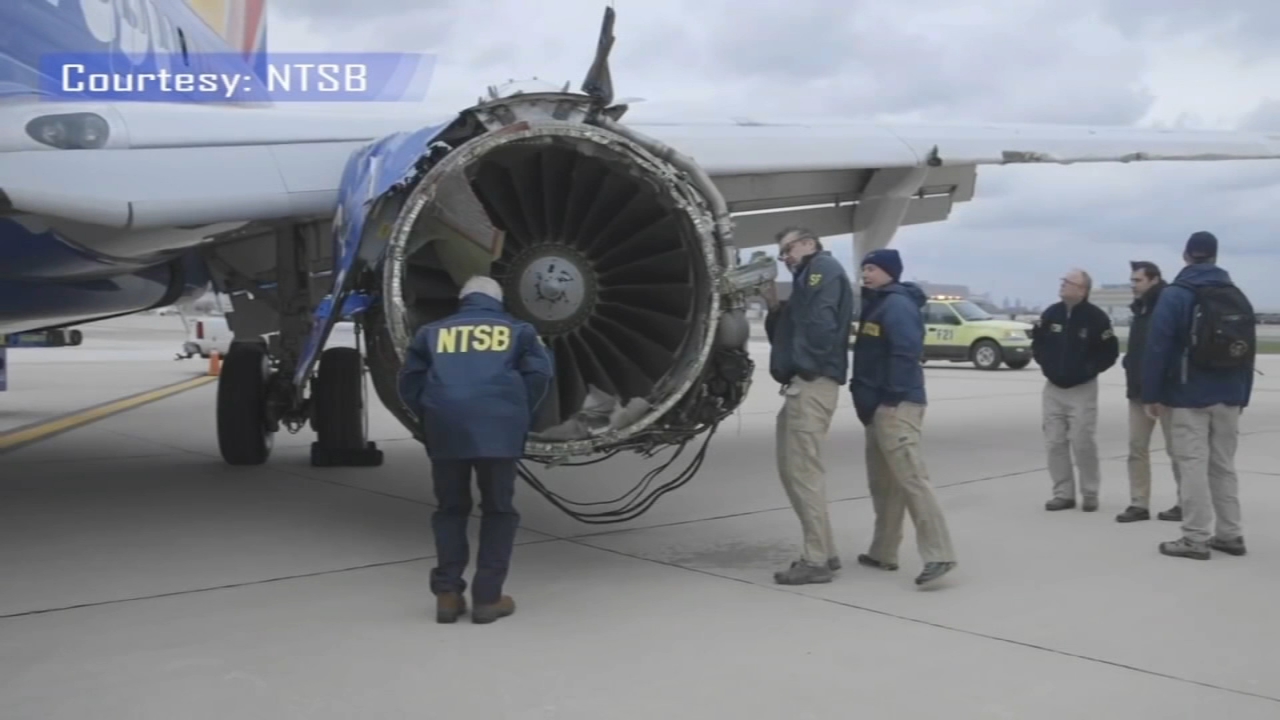 NTSB: Blown Southwest jet engine showed metal fatigue
A preliminary examination of the blown jet engine of the Southwest Airlines plane that set off a terrifying chain showed evidence of "metal fatigue," according to the National Transportation Safety Board.

The National Transportation Safety Board is leading the investigation into what caused the engine to fail.

"Obviously very grateful there were no other injuries other than one fatality. By all reports, I thought the crew acted magnificently," said Kelly.

Passenger Kathy Farnan said, "They were also taking care of everybody with running around with oxygen, making sure everybody had enough oxygen."

On Twitter, Kristopher Johnson said, "These are the heroes of SW 1380. We lost an engine mid-flight and they guided us back to Philly."

The airline said it would make sure the flight crew is feeling fit for duty before they head back in the air.