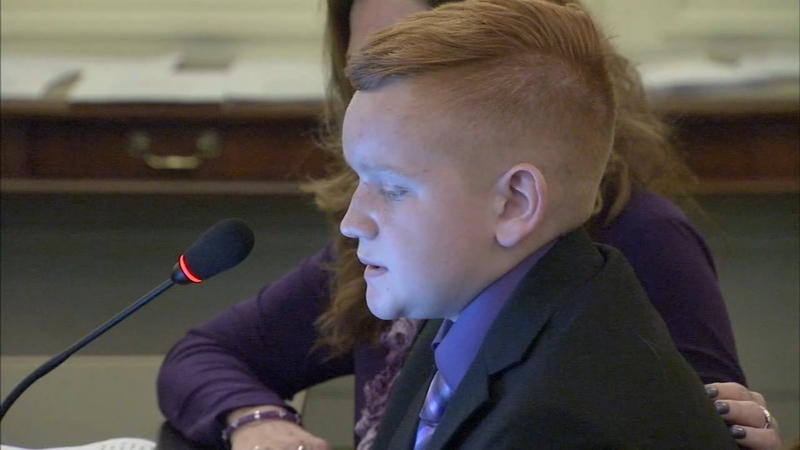 TRENTON, New Jersey (WPVI) -- He's just 13 years old but on Thursday, an 8th grader from Maple Shade testified in support of a law in his own name.

Paul St. Pierre is one of 12,000 kids in New Jersey who suffers from epilepsy.

On Thursday, he began the fight for Paul's Law, to create a safe environment for all of them.

"Last year I was having a mini seizure and my teachers didn't know and they just sent me down to the nurse," says St. Pierre.

It's something many children who suffer from epilepsy are familiar with - the feeling of fear.

Paul, who loves math and science and Minecraft, testified in front of the NJ Senate Education Committee in Trenton to create change.

"What we are trying to do is train teachers how to recognize a seizure when it's happening and students will be safe in school," says St. Pierre.

Paul was diagnosed last year and his mom, Colleen Quinn, said the Maple Shade School District created its own protocol to train teachers to respond.

"Paul came to me very upset and asked why this happened to him and I said, 'I don't know, but I will find a silver lining,'" said Quinn.
That silver lining? Create Paul's Law to make that training mandatory for all school personnel across the state.

"Paul is a typical young boy and a fabulous brave young man throughout his whole diagnosis," Quinn says. "It has been a little bit challenging but he's a warrior."

November is National Epilepsy Month, and there's been a greater awareness of the condition since this summer's tragic death of 20-year-old Disney star Cameron Boyce.

Paul's Law would keep the momentum going across the Garden State.

"He feels like he's taking something that's tragic and turned it around to be something to the world," says Quinn.