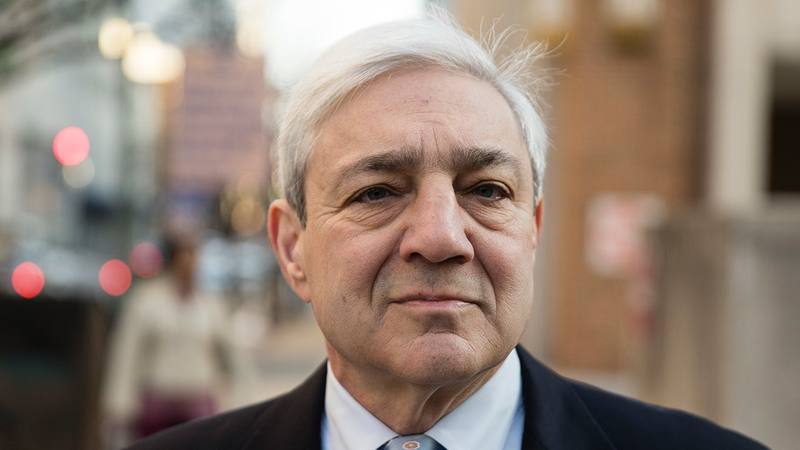 Spanier's lawyers argued his conviction under a 2007 law for mishandling a complaint about former assistant football coach Jerry Sandusky showering with a boy in 2001 violated the U.S. Constitution. They also assert that the statute of limitations was not properly applied.

The state attorney general's office wants U.S. Magistrate Judge Karoline Mehalchick in Scranton, Pennsylvania, to do what state courts have done and uphold Spanier's misdemeanor conviction for a single count of child endangerment.

Mehalchick did not indicate when she will rule, and it was unclear whether she might order a new trial or take some other action.

Spanier was charged under a version of the child endangerment law that was revised in 2007 to specify that it can apply to defendants who supervise people who are responsible for the safety and well-being of children.

He argues that his conviction based on actions in 2001 violates the "ex post facto" constitutional ban on charging people under laws passed after the alleged crimes.

Deputy Attorney General Gregory Simatic, however, argued that "the 2007 statute merely made explicit what was inherent or implicit" in a version of the child endangerment law that was in place in 2001.

He further argued that the statute applied to Spanier because the former university president qualified as someone who supervises children, pointing to a 2015 Pennsylvania State Supreme Court decision in the case of Monsignor William Lynn, a Roman Catholic administrator in the Philadelphia Archdiocese.

Lynn, the first U.S. church official ever prosecuted for covering up child molestation by priests, was arrested on child-endangerment charges. He argued at trial he'd merely followed orders. He spent three years in and out of prison as his conviction was twice overturned by the Pennsylvania Supreme Court. He currently awaits a third trial.

In the Lynn decision, the justices interpreted the child endangerment statute that was in place in 2001 as applying to those who supervise people who are actually watching over children day to day.

Simatic said Spanier met that definition since he met with top lieutenants about the shower incident and weighed in by email about their decision to warn Sandusky but not call police.

"Obviously, he must bear the consequences for that decision," Simatic said.

Both sides also addressed whether the statute of limitations was properly applied.

The trial judge in Spanier's case wrote after the verdict that the two-year statute of limitations did not apply because of the age of the boy in the shower with Sandusky.

That was a problem, Merenstein argued, because the defense did not get an opportunity to argue that issue during the trial and to make prosecutors prove that the boy - whose identity has never been conclusively determined - was younger than 14.

Spanier, 70, was forced out shortly after Sandusky was arrested in 2011 for child molestation and was himself charged with a criminal cover-up a year later. Most of the eight counts he faced were thrown out before his 2017 trial, and jurors acquitted him of what remained, except the single child endangerment count. He has since remained free on bail.

He remains a tenured faculty member on administrative leave, and Penn State won't say what his salary is. At Thursday's hearing, Spanier declined to comment on the case or his scheduled incarceration.

Sandusky was convicted of 45 counts but recently was granted a new sentencing. The two administrators who, along with Spanier, formulated the school's response to the 2001 reports that Sandusky had showered with a boy, former vice president Gary Schultz and former athletic director Tim Curley, pleaded guilty to child endangerment on the eve of trial, testified for the prosecution and served short sentences.