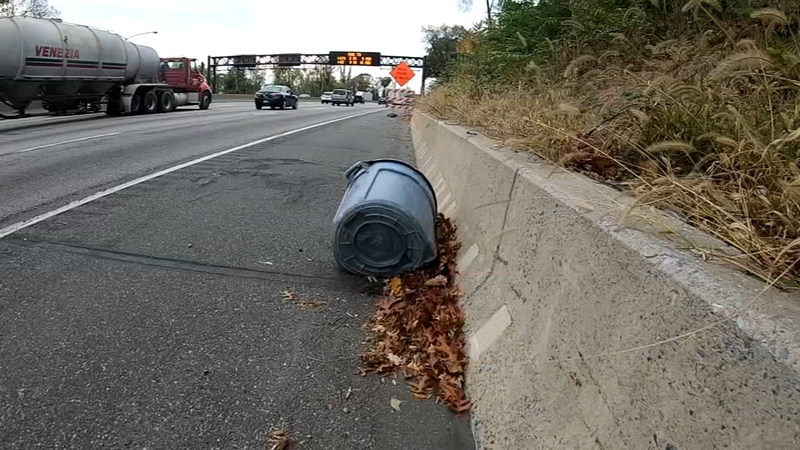 PHILADELPHIA (WPVI) -- For the better part of two decades, the Pennsylvania Department of Transportation has allowed companies to advertise on its highways to help pay for roadway cleanup. It's called the Sponsor a Highway Program.

But an Action News Investigation is now raising questions about the program and supervision by PennDOT.

PennDOT says advertisers pay roughly $5,000 a year to sponsor a mile of highway.

The sponsors get a sign for advertisement on the highway. Talk to people about our highways and here is what you hear: "our highways are trashed," "there is trash all over."

He says, "I don't know where the money's going but it's not going where needs to be."

He says too often, his sponsored sections of roadway are littered with trash.

"Have you complained?" asked Action News.

"Oh, absolutely. When we get calls and pictures," Barbera says.

We marked pieces of existing trash on 16 sections of the sponsored highway in August.

From water jugs, two bottles and other litter. We went up and down the Blue Route, Schuylkill Expressway, and Route 202. We then logged our marked trash.

We found 11 of those 16 sections the Maintenance Corporation reportedly cleaned still had marked trash including a stretch sponsored by Barbera.

"That upsets me for a lot of reasons, one, just the average client that drives by they think 'oh look Barbera didn't clean up.'"

PennDOT says it does accountability surveys with counties to make sure the Maintenance Corporation is doing its job.

But Action New also sorted data provided by PennDOT for 2018 cleanups. We found most sections of the highway were only cleaned 2 or 3 times, not the 6 required by the contract.

We posed this question to Barbera: "You think you're wasting your money?"

"In in the last couple years? Yes. Absolutely. Can you get me a refund?" Barbera said.

The Maintenance Corporation tells Action News four of our 11 questionable sections were cleaned after our final inspection. Even though, they were reported cleaned to PennDOT on September 3.

PennDOT refused our request for an on-camera interview and tried to minimize its role in the program. The agency says the contract with the vendor is in its final year and up for rebid in 2020. It released a statement:

"PennDOT has not received any complaints from sponsors regarding the level of service provided by the vendor. When issues have been identified by our staff, we have handled accordingly with the vendor. If sponsors have issues with the vendor's performance, we would encourage them to direct those concerns to the Roadway Programs office so we can address those concerns immediately. As a matter of practice, consistently review the quality and efficacy of all of our programs, including this one, and will continue to do so. As we've said, the contract with this vendor is in its final year and as we prepare to rebid, we'll review for ways to increase accountability."

The Adopt A Highway Maintenance Corporation maintains it's doing what it's contracted to do and says, "Our employees have for over 30 years, put themselves at risk to do a job that many would not and it is often a thankless one. This PennDOT program and other sponsor programs throughout the country fund important work that genuinely makes a difference to the communities, towns and cities who benefit from these programs."
Report a correction or typo
Related topics:
societytrashlitteringpenndotaction news investigation
Copyright © 2022 WPVI-TV. All Rights Reserved.
TOP STORIES
Police officers, good Samaritan lift SUV off trapped woman
Laundrie claimed responsibility for Petito's death in notebook: FBI
Conjoined twins separated at CHOP after 10-hour surgery
Police investigate 2 fatal hit-and-runs in Pennsauken
Social media photo of student with gun prompted school lockdown
Program offers scholarships to help minorities break into real estate
Local nonprofit aims to secure funding to keep their doors
Show More
AccuWeather: Bitter Cold Start to the Weekend
Police: 14 stolen catalytic converters recovered in Bucks County
Alternative emails used for online services
Exclusive video: Officers come under fire during NE Philly pursuit
Louie Anderson, Emmy-winning comedian, dies at 68
More TOP STORIES News