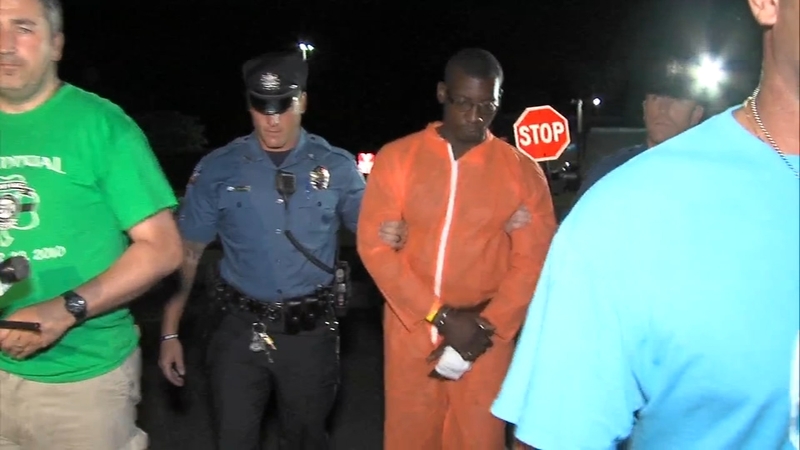 BENSALEM, Pa. (WPVI) -- Authorities have captured a man sought in the stabbing death of his ex-girlfriend who was found inside her car in Bensalem, Pa.

Bensalem police say 45-year-old William Table was captured Monday, shortly after he allegedly stabbed a homeless man in an encampment.

Table is charged with homicide and kidnapping in the death of 43-year-old Teresa Priestly.

Table kept quiet as he was walked from the police station to appear in court, following the 12-hour manhunt that ended in Philadelphia.

Table is accused of stabbing his ex-girlfriend, Priestley, to death while she was driving away from her Bensalem apartment.

The two had dated but recently broke up, according to Harran.

"It appears they had been living together prior to this but just recently he was thrown out of the apartment and she just had her locks changed," Harran said.

It was right around 6:45 a.m. when neighbors at the Village Square Apartments heard something disturbing.

"I heard a woman screaming 'help me,'" said Mike Angely. "After that, tires screeched."

Around that same time, police say Priestley called 911 saying she was in danger.

Within a minute, another call came in reporting an accident in the 3100 block of Hulmeville Road. Priestly was found stabbed to death inside the vehicle.

At first, investigators believe the suspect had returned to the apartment with Priestly's two teenage children inside. So, police quickly evacuated that section of the complex.

"They pretty much just guided me through here and I had to go somewhere for about an hour, come back, and had no idea what was going on. Went on Facebook and saw the article and I was like holy crap, that's crazy," said neighbor Alyssa Barlow.

Table was not inside. Police were questioning three people who were in the apartment.

Harran says cases like these still break his heart.