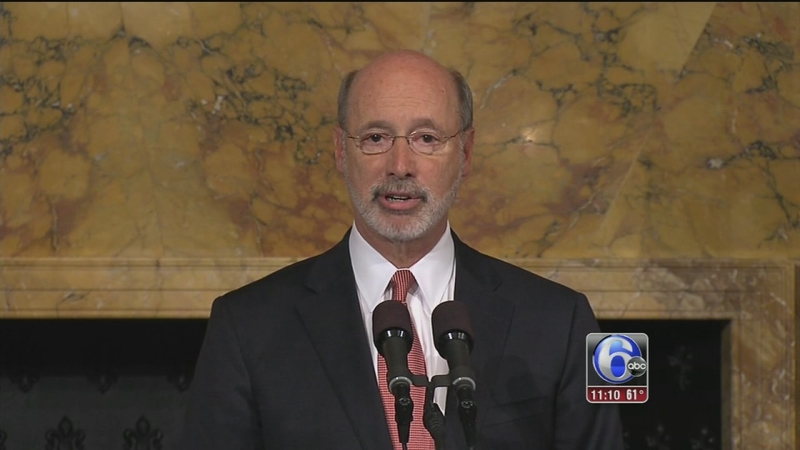 Gov. Tom Wolf's drive for a multibillion-dollar tax increase from a Republican-controlled Legislature to fund a record increase in public school aid ultimately fell far short- he got half the aid he wanted - and fueled a budget fight without parallel in the state's modern history.

A Republican-penned $6.6 billion supplemental spending package with no new taxes will become law Monday, leaving Illinois as the only state still without a budget in place for the current fiscal year. In addition to education money, it also funds prisons, agriculture programs and health care spending.

In recent days, Democratic lawmakers increasingly pressured Wolf to relent on his veto. Some raised the possibility of voting with Republicans to override Wolf's veto and deliver a damaging political blow.

But the announcement hardly ended the partisan standoff, as a new budget is due in three months and Wolf said he would veto a companion bill to the supplemental package.

Wolf said he had convinced himself it was "time to move on" and start work on the next budget.

Still, the first-term Democratic governor said the budget remains out of balance and underfunds crucial needs, and that fresh tax money is needed to wipe out a damaging long-term deficit.

"What I did do is bring attention to the fact that we have this big structural deficit, we have this train wreck coming at us July 1 ... and I believe that everybody in Harrisburg now understands that," said Wolf, who opted to let the document and separate legislation to fund universities become law without his signature.

That attention is a meager consolation prize compared to the governor's ambitious agenda when he unveiled his proposed budget a year ago. Allowing the spending measure to pass completes a $30 billion budget package that's similar to what Wolf previously vetoed. The Republican-penned package delivers a $200 million boost to public school aid, half of what Wolf had originally sought, and a 5 percent increase for state-subsidized universities.

The budget includes a 3 percent increase in overall spending, but it does so without a multibillion-dollar tax increase that Wolf had sought to deliver a record boost in aid to public schools and wipe out a long-term deficit that has damaged Pennsylvania's credit rating. Democrats said the budget would add hundreds of millions to what they called a $2 billion structural deficit for 2016-17.

At one point, Wolf had negotiated a deal with top Republican lawmakers that revolved around a 6 percent spending increase and a $1-billion-plus tax increase to reverse post-recession cuts to public schools and human services and to narrow the deficit. The deal also promised involved changes to the state's underfunded pension systems, but it dissolved in December in the face of ardent anti-tax sentiment among many legislative Republicans.

"Revenues will be a last resort for us," Senate Majority Leader Jake Corman, R-Centre, told reporters shortly after the governor's announcement. "Yes, we concur that there's a structural deficit. But there's two ways to deal with a structural deficit. One is to reduce the spend, and two is increase revenue. The governor has been very clear that he wants to increase revenue. Our preferable approach is to reduce the spend."

In recent months, school officials, editorial boards and others have heaped scorn on Harrisburg over the budget fight, which pits a central element of the Democratic agenda, more education funding, against a key Republican tenet, avoiding additional taxes.

David Wytiaz, the superintendent of tiny and impoverished Aliquippa School District outside Pittsburgh, had warned that the district would close May 1. On Wednesday, he called the situation "as dire as it could be."

The companion bill Wolf plans to veto is known as the fiscal code. He said it would violate the state constitution, weaken environmental regulations and infringe on executive branch powers. Republicans warned an enacted fiscal code bill was required to authorize $150 million in new K-12 spending and subsidies for school construction.

Wolf's office said he would distribute the money "in the most appropriate manner possible," noting that he's had that discretion since passage of a budget he partially vetoed in December.