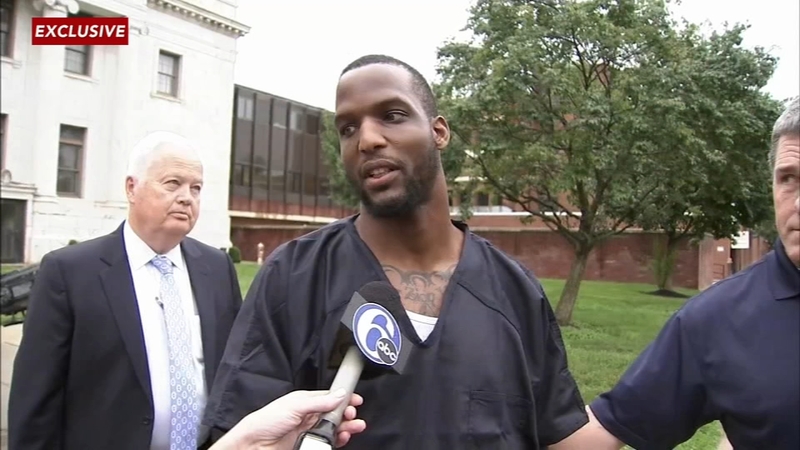 In Delaware County, a correctional officer is under arrest Friday evening and charged with trying to smuggle drugs into the George Hill Correctional Facility.

Only Action News was there as that officer walked out of court in handcuffs.

Friday night, he'll be staying there as a prisoner after being accused of smuggling in drugs and cigarettes.

"I made a dumb decision. I should have thought it through," he said.

Twenty-five-year-old Bramiir Cannon, a correctional officer at the George W. Hill prison, is being charged with attempting to smuggle K2 or "synthetic marijuana" and cigarettes inside.

He entered the prison as a guard on Thursday and returns Friday, to sit behind bars. We spoke exclusively to him as he was transported to jail.

"I'm going to use this as a learning lesson, I hope God will see it through. I'm man enough to admit to my mistakes," said Cannon.

The Delaware County DA's office says the 25-year-old corrections officer from Folcroft was caught with the contraband strapped to his leg after arriving late to work and being confronted by a supervisor who noticed he was walking with a limp.

K2 and 40 cigarettes were found strapped to Cannon's leg. Police say he admitted that he was trying to smuggle them to an inmate for a negotiated price of 200 to 250 dollars.

This case comes as 25 prisons across the state officers were shut down after 29 employees were sickened from exposure to K2.

Bramiir Cannon's bail was set for $100,000 cash. He'll be remanded to George Hill Correctional Facility. The next hearing is September 13.